Complete the form below to receive the latest headlines and analysts' recommendations for Power Integrations with our free daily email newsletter:

Power Integrations, Inc. (NASDAQ:POWI) VP Radu Barsan sold 2,239 shares of Power Integrations stock in a transaction on Friday, February 19th. The shares were sold at an average price of $94.74, for a total transaction of $212,122.86. Following the completion of the sale, the vice president now directly owns 52,400 shares of the company’s stock, valued at approximately $4,964,376. The transaction was disclosed in a document filed with the SEC, which is available at the SEC website.

Power Integrations (NASDAQ:POWI) last issued its quarterly earnings results on Tuesday, February 2nd. The semiconductor company reported $0.60 earnings per share for the quarter, topping the Zacks’ consensus estimate of $0.44 by $0.16. The company had revenue of $150.69 million for the quarter, compared to the consensus estimate of $129.88 million. Power Integrations had a net margin of 44.72% and a return on equity of 8.34%. The firm’s quarterly revenue was up 31.7% on a year-over-year basis. During the same period in the previous year, the firm earned $0.41 EPS. On average, equities research analysts forecast that Power Integrations, Inc. will post 1.09 earnings per share for the current fiscal year.

The company also recently disclosed a quarterly dividend, which will be paid on Wednesday, March 31st. Investors of record on Friday, February 26th will be paid a $0.13 dividend. This is a boost from Power Integrations’s previous quarterly dividend of $0.11. This represents a $0.52 dividend on an annualized basis and a yield of 0.57%. The ex-dividend date is Thursday, February 25th. Power Integrations’s payout ratio is currently 49.44%. 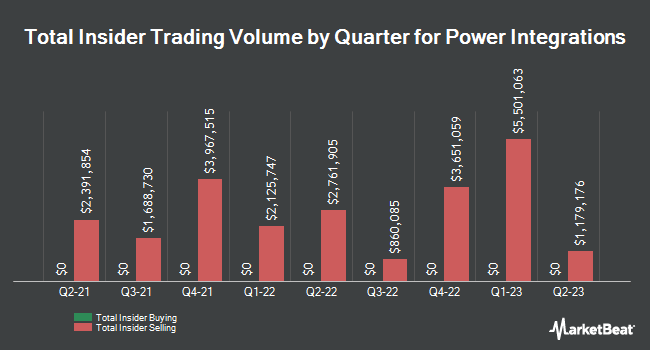