Complete the form below to receive the latest headlines and analysts' recommendations for CarMax with our free daily email newsletter:

CarMax (NYSE:KMX) announced its earnings results on Wednesday. The company reported $1.27 earnings per share (EPS) for the quarter, topping analysts’ consensus estimates of $1.26 by $0.01, MarketWatch Earnings reports. The company had revenue of $5.16 billion during the quarter, compared to analysts’ expectations of $5.17 billion. CarMax had a net margin of 4.01% and a return on equity of 20.30%. The firm’s quarterly revenue was up 4.1% compared to the same quarter last year. During the same quarter in the previous year, the business posted $1.30 earnings per share.

KMX has been the topic of a number of analyst reports. Wedbush increased their target price on CarMax from $120.00 to $140.00 and gave the company an “outperform” rating in a report on Wednesday, February 17th. Oppenheimer started coverage on CarMax in a research note on Wednesday, December 23rd. They set a “buy” rating and a $130.00 price objective on the stock. Morgan Stanley cut their target price on shares of CarMax to $165.00 and set an “overweight” rating for the company in a research note on Wednesday, December 23rd. JPMorgan Chase & Co. cut shares of CarMax from an “overweight” rating to a “neutral” rating and set a $115.00 price target on the stock. in a research note on Wednesday, December 9th. Finally, Northcoast Research upgraded shares of CarMax from a “neutral” rating to a “buy” rating and set a $130.00 price target for the company in a report on Tuesday, January 19th. Two analysts have rated the stock with a sell rating, two have given a hold rating, eleven have assigned a buy rating and one has issued a strong buy rating to the company’s stock. The stock has an average rating of “Buy” and an average target price of $109.88.

CarMax, Inc, through its subsidiaries, operates as a retailer of used vehicles in the United States. The company operates in two segments, CarMax Sales Operations and CarMax Auto Finance. It offers customers a range of makes and models of used vehicles, including domestic, imported, and luxury vehicles; vehicles that do not meet its retail standards to licensed dealers through on-site wholesale auctions; and extended protection plans to customers at the time of sale.

Recommended Story: Why Net Income is Important to Investors 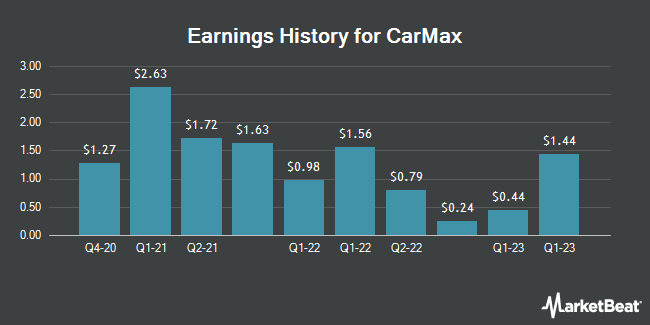 Receive News & Ratings for CarMax Daily - Enter your email address below to receive a concise daily summary of the latest news and analysts' ratings for CarMax and related companies with MarketBeat.com's FREE daily email newsletter.