Complete the form below to receive the latest headlines and analysts' recommendations for Owl Rock Capital with our free daily email newsletter:

Owl Rock Capital Co. (NYSE:ORCC) has earned a consensus rating of “Buy” from the eleven analysts that are presently covering the firm, Marketbeat.com reports. One analyst has rated the stock with a hold recommendation and ten have issued a buy recommendation on the company. The average 1 year target price among brokers that have issued ratings on the stock in the last year is $14.39.

Owl Rock Capital (NYSE:ORCC) last issued its earnings results on Monday, February 22nd. The technology company reported $0.29 earnings per share (EPS) for the quarter, beating the consensus estimate of $0.28 by $0.01. The company had revenue of $221.25 million for the quarter, compared to analyst estimates of $210.41 million. Owl Rock Capital had a net margin of 44.28% and a return on equity of 9.63%. The company’s revenue for the quarter was up 9.4% on a year-over-year basis. During the same quarter last year, the firm earned $0.36 EPS. On average, sell-side analysts predict that Owl Rock Capital will post 1.32 EPS for the current year.

The business also recently declared a quarterly dividend, which will be paid on Friday, May 14th. Shareholders of record on Wednesday, March 31st will be paid a $0.31 dividend. This represents a $1.24 dividend on an annualized basis and a yield of 8.83%. The ex-dividend date is Tuesday, March 30th. Owl Rock Capital’s payout ratio is currently 80.52%.

Owl Rock Capital Corporation is a business development company. The fund makes investments in senior secured or unsecured loans, subordinated loans or mezzanine loans and also considers equity-related securities including warrants and preferred stocks. It seeks to invest in middle market companies based in the United States, with EBITDA between $10 million and $250 million annually and/or annual revenue of $50 million and $2.5 billion at the time of investment.

Further Reading: What Is Dividend Yield and How Do You Calculate It? 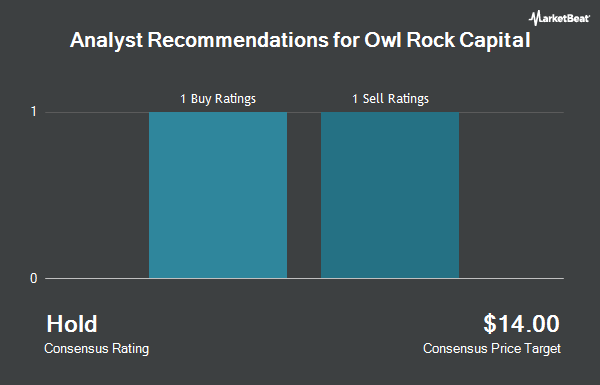