Complete the form below to receive the latest headlines and analysts' recommendations for Arvinas with our free daily email newsletter:

Arvinas, Inc. (NASDAQ:ARVN) insider Ian Taylor sold 25,000 shares of the stock in a transaction that occurred on Monday, April 5th. The shares were sold at an average price of $66.81, for a total transaction of $1,670,250.00. Following the completion of the transaction, the insider now directly owns 103,645 shares of the company’s stock, valued at approximately $6,924,522.45. The sale was disclosed in a filing with the SEC, which is available through this hyperlink.

Arvinas (NASDAQ:ARVN) last released its quarterly earnings results on Sunday, February 28th. The company reported ($0.99) earnings per share for the quarter, missing analysts’ consensus estimates of ($0.78) by ($0.21). Arvinas had a negative net margin of 403.77% and a negative return on equity of 46.99%. The firm had revenue of $2.22 million for the quarter, compared to the consensus estimate of $7.46 million. On average, equities research analysts expect that Arvinas, Inc. will post -2.77 earnings per share for the current year.

Arvinas, Inc is a biopharmaceutical company, which engages in the discovery, development and commercialization of therapies to degrade disease-causing proteins. Its product candidates are ARV-110, a proteolysis targeting chimera (PROTAC) protein degrader that is in phase I clinical trial targeting the androgen receptor (AR) protein for the treatment of men with metastatic castration-resistant prostate cancer; and ARV-471, a PROTAC protein degrader targeting the estrogen receptor protein for the treatment of patients with metastatic ER positive/HER2 negative breast cancer.

See Also: What is total return in investing? 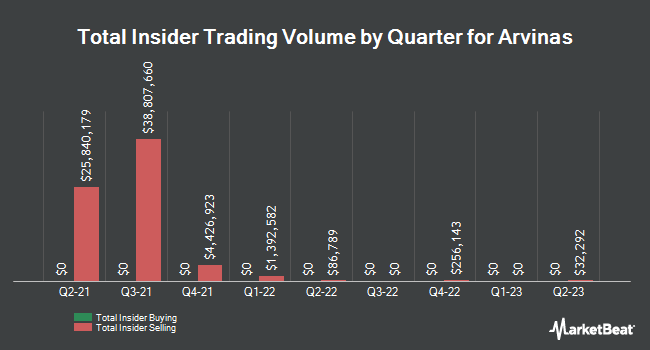 Receive News & Ratings for Arvinas Daily - Enter your email address below to receive a concise daily summary of the latest news and analysts' ratings for Arvinas and related companies with MarketBeat.com's FREE daily email newsletter.

GameCredits Price Down 28.7% Over Last 7 Days