Complete the form below to receive the latest headlines and analysts' recommendations for Western Midstream Partners with our free daily email newsletter:

Captrust Financial Advisors lifted its holdings in shares of Western Midstream Partners, LP (NYSE:WES) by 305.5% in the fourth quarter, according to its most recent disclosure with the Securities and Exchange Commission. The fund owned 5,162 shares of the pipeline company’s stock after acquiring an additional 3,889 shares during the quarter. Captrust Financial Advisors’ holdings in Western Midstream Partners were worth $71,000 at the end of the most recent quarter.

The firm also recently disclosed a quarterly dividend, which was paid on Friday, February 12th. Investors of record on Monday, February 1st were paid a dividend of $0.311 per share. This represents a $1.24 annualized dividend and a yield of 6.36%. The ex-dividend date of this dividend was Friday, January 29th. Western Midstream Partners’s dividend payout ratio is 77.99%.

In other Western Midstream Partners news, major shareholder Petroleum Corp /De/ Occidental sold 11,500,000 shares of Western Midstream Partners stock in a transaction dated Thursday, March 25th. The stock was sold at an average price of $17.25, for a total transaction of $198,375,000.00. The sale was disclosed in a document filed with the Securities & Exchange Commission, which is accessible through the SEC website. 0.01% of the stock is currently owned by company insiders.

Western Midstream Partners, LP, together with its subsidiaries, acquire, own, develop, and operate midstream assets primarily in the United States. It is involved in gathering, compressing, treating, processing, and transporting of natural gas; gathering, stabilizing, and transporting of condensate, natural gas liquids, and crude oil; and gathering and disposing of produced water.

Read More: What is channel trading?

Want to see what other hedge funds are holding WES? Visit HoldingsChannel.com to get the latest 13F filings and insider trades for Western Midstream Partners, LP (NYSE:WES). 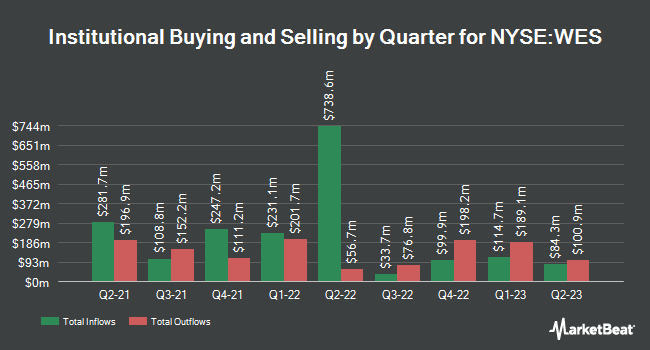