Complete the form below to receive the latest headlines and analysts' recommendations for Commercial Metals with our free daily email newsletter:

Healthcare of Ontario Pension Plan Trust Fund purchased a new stake in shares of Commercial Metals (NYSE:CMC) during the 4th quarter, according to the company in its most recent disclosure with the Securities & Exchange Commission. The fund purchased 437,300 shares of the basic materials company’s stock, valued at approximately $8,982,000. Healthcare of Ontario Pension Plan Trust Fund owned approximately 0.36% of Commercial Metals at the end of the most recent reporting period.

Commercial Metals (NYSE:CMC) last announced its quarterly earnings data on Wednesday, March 17th. The basic materials company reported $0.66 earnings per share for the quarter, beating analysts’ consensus estimates of $0.61 by $0.05. The company had revenue of $1.46 billion during the quarter, compared to analyst estimates of $1.45 billion. Commercial Metals had a net margin of 4.75% and a return on equity of 16.20%. The firm’s revenue for the quarter was up 9.0% on a year-over-year basis. During the same quarter last year, the business posted $0.53 EPS. Equities analysts anticipate that Commercial Metals will post 1.73 EPS for the current fiscal year.

The company also recently declared a quarterly dividend, which will be paid on Wednesday, April 14th. Investors of record on Wednesday, March 31st will be issued a $0.12 dividend. The ex-dividend date of this dividend is Tuesday, March 30th. This represents a $0.48 dividend on an annualized basis and a dividend yield of 1.54%. Commercial Metals’s payout ratio is 18.18%. 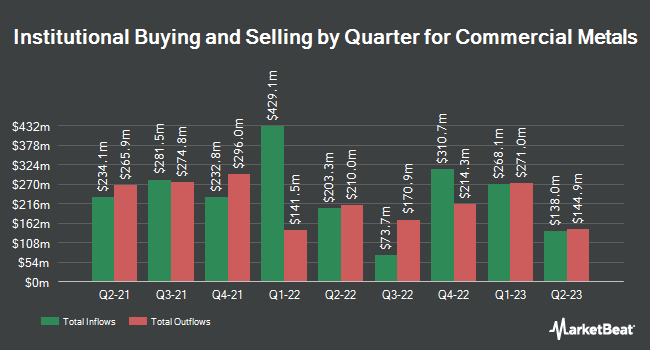