Incyte Co. (NASDAQ:INCY) EVP Dashyant Dhanak sold 396 shares of the business’s stock in a transaction that occurred on Thursday, April 1st. The shares were sold at an average price of $81.57, for a total value of $32,301.72. The transaction was disclosed in a filing with the Securities & Exchange Commission, which is accessible through the SEC website.

Incyte (NASDAQ:INCY) last issued its quarterly earnings data on Monday, February 8th. The biopharmaceutical company reported $0.93 EPS for the quarter, beating analysts’ consensus estimates of $0.63 by $0.30. The firm had revenue of $788.50 million for the quarter, compared to analyst estimates of $654.08 million. Incyte had a negative return on equity of 13.66% and a negative net margin of 13.62%. The company’s revenue for the quarter was up 36.1% on a year-over-year basis. During the same period in the prior year, the firm posted $0.65 EPS. On average, equities analysts anticipate that Incyte Co. will post -1.45 earnings per share for the current fiscal year.

Incyte Corporation, a biopharmaceutical company, focuses on the discovery, development, and commercialization of proprietary therapeutics in the United States and internationally. The company offers JAKAFI, a drug for the treatment of myelofibrosis and polycythemia vera cancers; PEMAZYRE, a fibroblast growth factor receptor kinase inhibitor for the treatment of adults; and ICLUSIG, a kinase inhibitor to treat chronic myeloid leukemia and philadelphia-chromosome positive acute lymphoblastic leukemia. 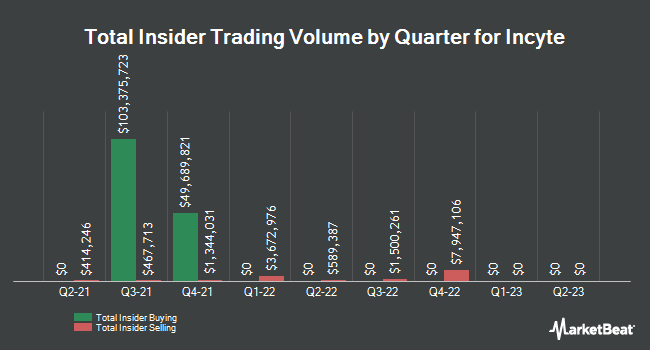