Complete the form below to receive the latest headlines and analysts' recommendations for Regions Financial with our free daily email newsletter:

Raymond James cut shares of Regions Financial (NYSE:RF) from a strong-buy rating to an outperform rating in a research note released on Wednesday morning, The Fly reports. Raymond James currently has $23.00 price target on the bank’s stock, up from their prior price target of $21.00.

The firm also recently declared a quarterly dividend, which was paid on Thursday, April 1st. Shareholders of record on Friday, March 5th were issued a $0.155 dividend. This represents a $0.62 annualized dividend and a yield of 2.94%. The ex-dividend date of this dividend was Thursday, March 4th. Regions Financial’s dividend payout ratio (DPR) is presently 40.00%.

Featured Article: How can you know how many shares are floating? 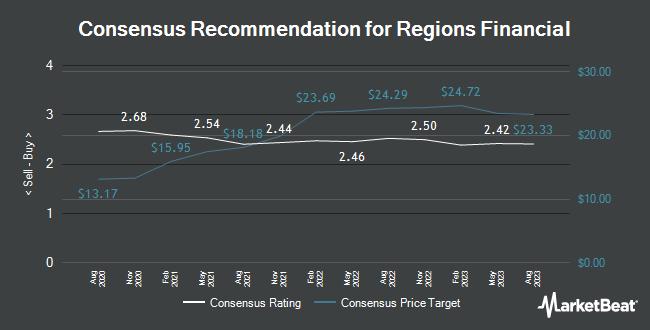