Complete the form below to receive the latest headlines and analysts' recommendations for Uber Technologies with our free daily email newsletter:

Uber Technologies, Inc. (NYSE:UBER) insider Tony West sold 6,500 shares of the firm’s stock in a transaction that occurred on Monday, April 5th. The shares were sold at an average price of $57.31, for a total value of $372,515.00. Following the completion of the sale, the insider now directly owns 189,108 shares in the company, valued at approximately $10,837,779.48. The transaction was disclosed in a document filed with the SEC, which can be accessed through this hyperlink.

Uber Technologies (NYSE:UBER) last posted its earnings results on Wednesday, February 10th. The ride-sharing company reported ($0.54) earnings per share (EPS) for the quarter, missing the Thomson Reuters’ consensus estimate of ($0.53) by ($0.01). Uber Technologies had a negative return on equity of 43.27% and a negative net margin of 53.12%. The company had revenue of $3.17 billion for the quarter, compared to analyst estimates of $3.56 billion. During the same quarter in the previous year, the firm posted ($0.64) earnings per share. Uber Technologies’s quarterly revenue was down 15.5% compared to the same quarter last year. Research analysts anticipate that Uber Technologies, Inc. will post -3.86 EPS for the current fiscal year. 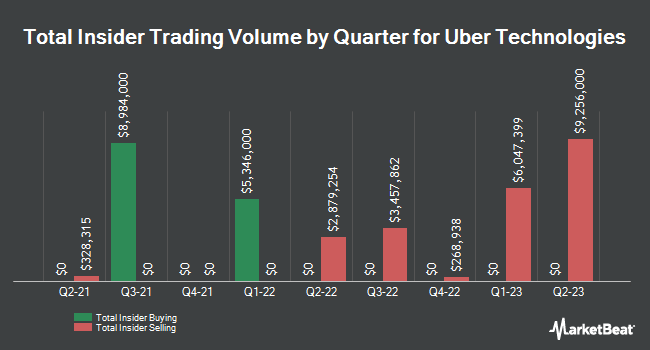