Complete the form below to receive the latest headlines and analysts' recommendations for Noodles & Company with our free daily email newsletter:

Credit Suisse AG acquired a new stake in Noodles & Company (NASDAQ:NDLS) during the 4th quarter, according to its most recent filing with the SEC. The institutional investor acquired 10,052 shares of the restaurant operator’s stock, valued at approximately $79,000.

Noodles & Company (NASDAQ:NDLS) last posted its quarterly earnings data on Thursday, February 25th. The restaurant operator reported ($0.04) EPS for the quarter, missing the Zacks’ consensus estimate of $0.03 by ($0.07). Noodles & Company had a negative return on equity of 21.18% and a negative net margin of 5.15%. The company had revenue of $107.17 million during the quarter, compared to analyst estimates of $105.83 million. As a group, sell-side analysts forecast that Noodles & Company will post -0.23 earnings per share for the current fiscal year.

Noodles & Company develops and operates fast-casual restaurants. It offers cooked-to-order dishes, including noodles and pasta, soups, salads, and appetizers. As of December 29, 2020, the company operated 378 company-owned and 76 franchised restaurants in 29 states, and the District of Columbia. Noodles & Company was founded in 1995 and is based in Broomfield, Colorado. 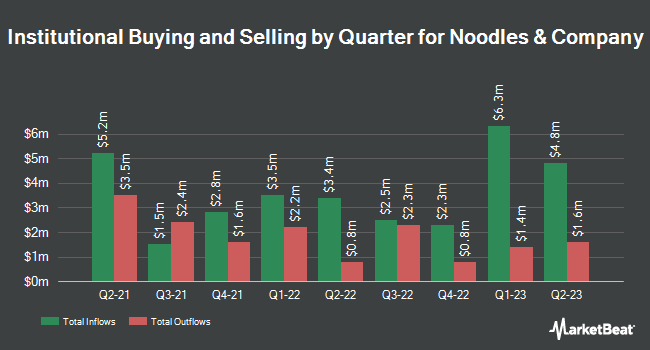