Complete the form below to receive the latest headlines and analysts' recommendations for Performance Food Group with our free daily email newsletter:

Performance Food Group (NYSE:PFGC) had its price objective upped by Morgan Stanley from $58.00 to $62.00 in a report issued on Monday morning, Analyst Ratings Network reports. They currently have an overweight rating on the food distribution company’s stock.

Performance Food Group (NYSE:PFGC) last released its quarterly earnings results on Tuesday, February 2nd. The food distribution company reported $0.35 EPS for the quarter, beating the consensus estimate of $0.26 by $0.09. Performance Food Group had a negative net margin of 0.58% and a positive return on equity of 2.92%. The business had revenue of $6.85 billion for the quarter, compared to analyst estimates of $6.90 billion. During the same period in the prior year, the business earned $0.58 earnings per share. The company’s quarterly revenue was up 12.8% on a year-over-year basis. As a group, research analysts expect that Performance Food Group will post 1.12 earnings per share for the current year.

Performance Food Group Company, through its subsidiaries, markets and distributes food and food-related products in the United States. It operates in two segments, Foodservice and Vistar. The company offers a range of frozen foods, including meats, fully prepared appetizers and entrees, fruits, vegetables, and desserts; canned and dry foods; fresh meats; dairy products; beverage products; imported specialties; fresh produce; and candy, snack, and other products, as well as beef, seafood, shortenings and oils, baked goods, salad dressings, teas and cocoas, pork, and others. 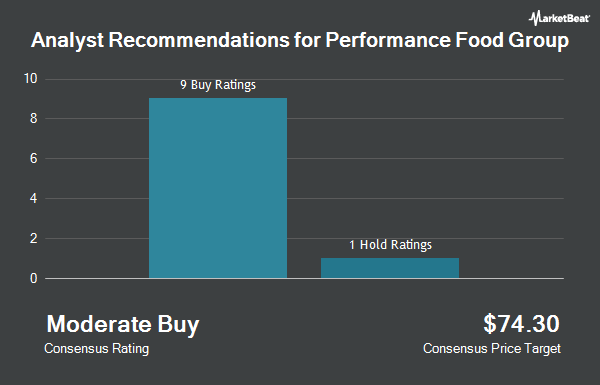