Complete the form below to receive the latest headlines and analysts' recommendations for Air France-KLM with our free daily email newsletter:

Air France-KLM (EPA:AF) Given a €5.20 Price Target at Barclays

Air France-KLM (EPA:AF) received a €5.20 ($6.12) price objective from equities research analysts at Barclays in a report issued on Wednesday, Borsen Zeitung reports. The firm currently has a “neutral” rating on the stock. Barclays‘s price target would suggest a potential upside of 10.10% from the company’s previous close.

Air France-KLM SA, together with its subsidiaries, provides passenger transportation services on scheduled flights. The company operates through Network, Maintenance, Transavia, and Other segments. It also offers cargo transportation and aeronautics maintenance, and other air-transport-related services. 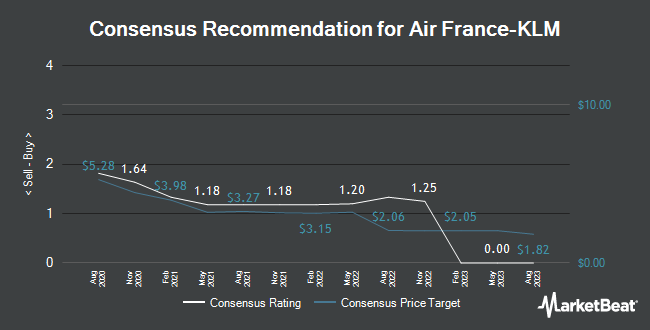