Complete the form below to receive the latest headlines and analysts' recommendations for Catalyst Pharmaceuticals with our free daily email newsletter:

According to Zacks, analysts expect that Catalyst Pharmaceuticals will report full year sales of $134.24 million for the current fiscal year, with estimates ranging from $125.72 million to $138.10 million. For the next financial year, analysts anticipate that the business will post sales of $157.50 million, with estimates ranging from $132.48 million to $174.40 million. Zacks’ sales averages are an average based on a survey of analysts that that provide coverage for Catalyst Pharmaceuticals.

Catalyst Pharmaceuticals (NASDAQ:CPRX) last posted its quarterly earnings data on Tuesday, March 16th. The biopharmaceutical company reported $0.11 earnings per share for the quarter, topping the consensus estimate of $0.09 by $0.02. The firm had revenue of $31.02 million for the quarter, compared to analysts’ expectations of $30.06 million. Catalyst Pharmaceuticals had a return on equity of 35.04% and a net margin of 60.48%.

Catalyst Pharmaceuticals, Inc, a biopharmaceutical company, focuses on developing and commercializing therapies for people with rare debilitating, chronic neuromuscular, and neurological diseases in the United States. It offers Firdapse, a proprietary form of amifampridine phosphate for the treatment of patients with lambert-eaton myasthenic syndrome. 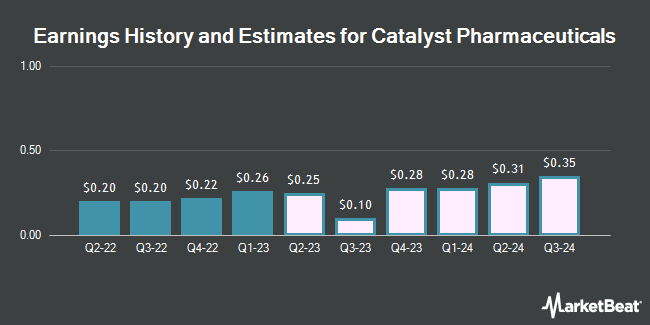