Complete the form below to receive the latest headlines and analysts' recommendations for Olympic Steel with our free daily email newsletter:

A number of equities analysts have weighed in on the company. Zacks Investment Research raised Olympic Steel from a “hold” rating to a “strong-buy” rating and set a $28.00 price target for the company in a research report on Thursday, March 11th. TheStreet upgraded shares of Olympic Steel from a “d+” rating to a “c-” rating in a research note on Wednesday, March 17th.

Olympic Steel (NASDAQ:ZEUS) last released its quarterly earnings data on Thursday, February 25th. The basic materials company reported $0.16 earnings per share (EPS) for the quarter, beating the Zacks’ consensus estimate of $0.06 by $0.10. The company had revenue of $331.55 million during the quarter. Olympic Steel had a negative return on equity of 2.20% and a negative net margin of 0.47%. Research analysts forecast that Olympic Steel, Inc. will post -0.56 earnings per share for the current year.

The company also recently announced a quarterly dividend, which was paid on Monday, March 15th. Stockholders of record on Monday, March 1st were given a $0.02 dividend. This represents a $0.08 annualized dividend and a dividend yield of 0.29%. The ex-dividend date of this dividend was Friday, February 26th. Olympic Steel’s payout ratio is 72.73%.

Recommended Story: What are the most popular ETFs

Want to see what other hedge funds are holding ZEUS? Visit HoldingsChannel.com to get the latest 13F filings and insider trades for Olympic Steel, Inc. (NASDAQ:ZEUS). 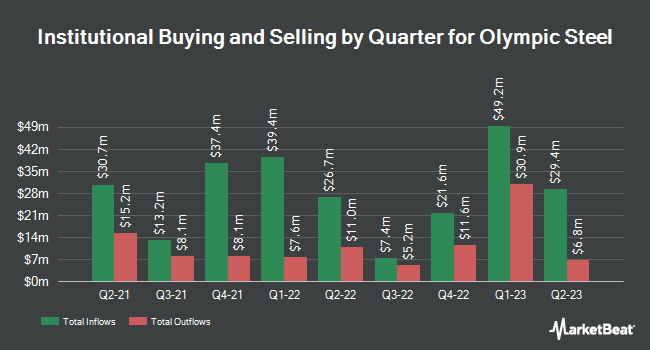