Complete the form below to receive the latest headlines and analysts' recommendations for East West Bancorp with our free daily email newsletter:

East West Bancorp (NASDAQ:EWBC) posted its earnings results on Wednesday. The financial services provider reported $1.44 earnings per share (EPS) for the quarter, beating analysts’ consensus estimates of $1.26 by $0.18, MarketWatch Earnings reports. The firm had revenue of $426.56 million during the quarter, compared to analyst estimates of $407.91 million. East West Bancorp had a net margin of 31.05% and a return on equity of 11.80%. East West Bancorp’s revenue was up 2.0% on a year-over-year basis. During the same period in the previous year, the business posted $1.00 EPS.

East West Bancorp, Inc operates as the bank holding company for East West Bank that provides a range of personal and commercial banking services to businesses and individuals in the United States and Greater China. It operates through three segments: Consumer and Business Banking, Commercial Banking, and Other. 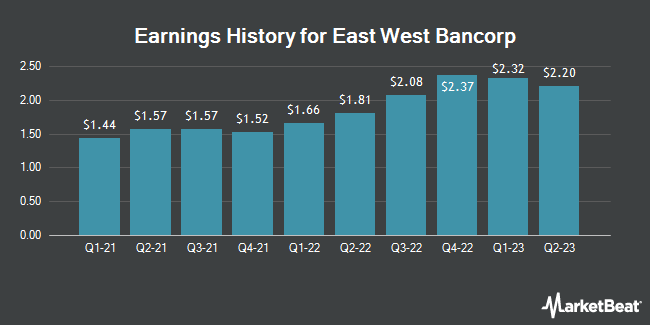