Complete the form below to receive the latest headlines and analysts' recommendations for Graco with our free daily email newsletter:

Graco (NYSE:GGG) released its quarterly earnings data on Tuesday. The industrial products company reported $0.58 earnings per share (EPS) for the quarter, beating the consensus estimate of $0.50 by $0.08, MarketWatch Earnings reports. Graco had a return on equity of 29.38% and a net margin of 18.88%. The firm had revenue of $454.10 million for the quarter, compared to analyst estimates of $426.13 million. During the same quarter in the prior year, the company earned $0.42 earnings per share. The business’s revenue for the quarter was up 21.5% compared to the same quarter last year.

The firm also recently disclosed a quarterly dividend, which will be paid on Wednesday, May 5th. Shareholders of record on Monday, April 19th will be issued a $0.1875 dividend. This represents a $0.75 dividend on an annualized basis and a yield of 0.97%. The ex-dividend date is Friday, April 16th. Graco’s dividend payout ratio (DPR) is presently 39.47%.

A number of equities research analysts have weighed in on the company. Morgan Stanley assumed coverage on Graco in a report on Wednesday, March 31st. They issued an “equal weight” rating and a $75.00 target price on the stock. Jefferies Financial Group raised shares of Graco from a “hold” rating to a “buy” rating and lifted their price target for the stock from $65.00 to $90.00 in a report on Tuesday, January 19th. Royal Bank of Canada upped their target price on shares of Graco from $78.00 to $84.00 and gave the stock an “outperform” rating in a research report on Wednesday, January 27th. Finally, DA Davidson upped their price objective on shares of Graco from $57.00 to $70.00 and gave the company a “neutral” rating in a research note on Tuesday, January 26th. They noted that the move was a valuation call. Three equities research analysts have rated the stock with a hold rating and three have issued a buy rating to the company. The stock presently has an average rating of “Buy” and an average price target of $74.33.

Graco, Inc is a manufacturing company, which designs, manufactures and markets systems and equipment used to move, measure, control, dispense and spray fluid and powder materials. It operates through the following segments: Industrial, Contractor and Process. The Industrial segment includes the Applied Fluid Technologies and Industrial Products divisions.

Featured Article: What is Cost of Goods Sold (COGS)? 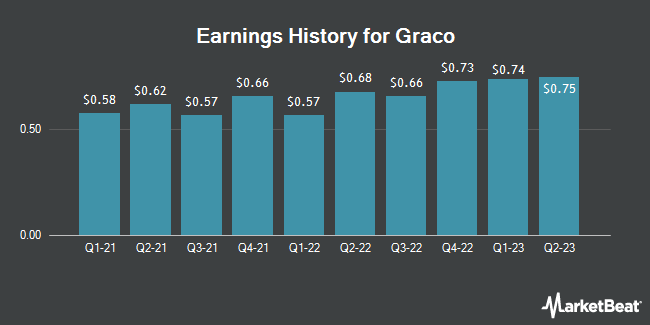 Receive News & Ratings for Graco Daily - Enter your email address below to receive a concise daily summary of the latest news and analysts' ratings for Graco and related companies with MarketBeat.com's FREE daily email newsletter.

district0x Trading Down 20.6% Over Last Week