Complete the form below to receive the latest headlines and analysts' recommendations for Lithia Motors with our free daily email newsletter:

Lithia Motors (NYSE:LAD) announced its quarterly earnings results on Tuesday. The company reported $5.89 EPS for the quarter, beating analysts’ consensus estimates of $4.73 by $1.16, MarketWatch Earnings reports. The company had revenue of $4.34 billion during the quarter, compared to analysts’ expectations of $3.89 billion. Lithia Motors had a return on equity of 23.52% and a net margin of 2.82%. Lithia Motors’s revenue was up 54.9% on a year-over-year basis. During the same period in the prior year, the business posted $2.01 EPS.

The company also recently disclosed a quarterly dividend, which was paid on Friday, March 26th. Shareholders of record on Friday, March 12th were given a dividend of $0.31 per share. The ex-dividend date of this dividend was Thursday, March 11th. This represents a $1.24 annualized dividend and a yield of 0.32%. Lithia Motors’s dividend payout ratio is currently 10.54%.

Lithia Motors, Inc engages in the operation of automotive franchises and retail of new and used vehicles. It operates through the following segments: Domestic, Import and Luxury. The Domestic segment comprises of retail automotive franchises that sell new vehicles manufactured by Chrysler, General Motors, and Ford.

See Also: What are retained earnings? 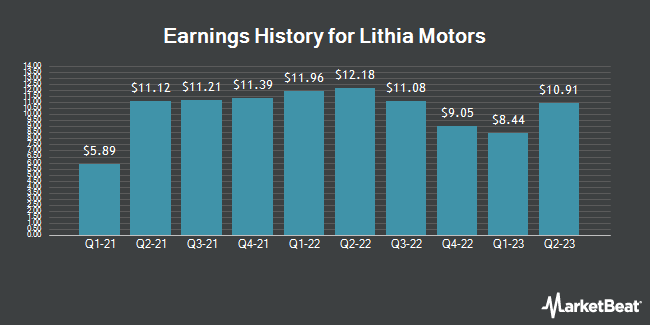