Complete the form below to receive the latest headlines and analysts' recommendations for AmerisourceBergen with our free daily email newsletter:

AmerisourceBergen Co. (NYSE:ABC) CEO Steven H. Collis sold 12,784 shares of AmerisourceBergen stock in a transaction that occurred on Tuesday, April 20th. The shares were sold at an average price of $120.07, for a total transaction of $1,534,974.88. Following the completion of the sale, the chief executive officer now owns 206,347 shares of the company’s stock, valued at $24,776,084.29. The transaction was disclosed in a legal filing with the Securities & Exchange Commission, which is available at this link.

AmerisourceBergen (NYSE:ABC) last announced its quarterly earnings results on Wednesday, February 3rd. The company reported $2.18 EPS for the quarter, beating the Zacks’ consensus estimate of $1.94 by $0.24. The firm had revenue of $52.50 billion for the quarter, compared to analyst estimates of $50.49 billion. AmerisourceBergen had a positive return on equity of 65.93% and a negative net margin of 1.80%. The business’s revenue for the quarter was up 9.7% on a year-over-year basis. During the same period last year, the firm posted $1.76 earnings per share. As a group, equities research analysts expect that AmerisourceBergen Co. will post 8.38 EPS for the current fiscal year. 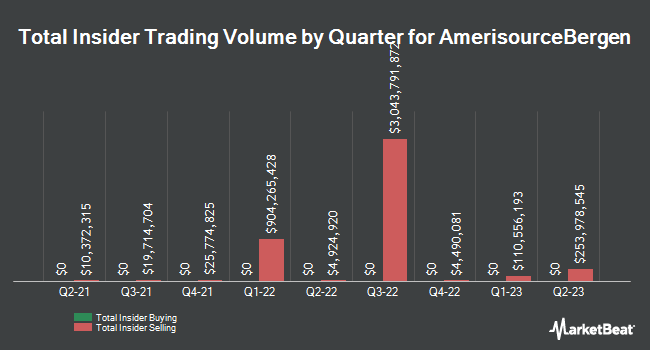 Moderna Upgraded to B- by TheStreet