Complete the form below to receive the latest headlines and analysts' recommendations for Criteo with our free daily email newsletter:

Guinness Atkinson Asset Management Inc raised its holdings in Criteo S.A. (NASDAQ:CRTO) by 845.9% during the first quarter, according to the company in its most recent Form 13F filing with the Securities and Exchange Commission (SEC). The institutional investor owned 4,020 shares of the information services provider’s stock after buying an additional 3,595 shares during the period. Guinness Atkinson Asset Management Inc’s holdings in Criteo were worth $140,000 as of its most recent SEC filing.

Criteo (NASDAQ:CRTO) last announced its quarterly earnings data on Tuesday, February 9th. The information services provider reported $0.98 EPS for the quarter, beating the Zacks’ consensus estimate of $0.76 by $0.22. Criteo had a net margin of 3.32% and a return on equity of 11.08%. The firm had revenue of $253.00 million during the quarter, compared to the consensus estimate of $228.52 million. During the same quarter last year, the firm earned $1.08 earnings per share. The firm’s revenue was down 4.9% compared to the same quarter last year. On average, equities research analysts forecast that Criteo S.A. will post 1.57 earnings per share for the current year.

In other news, EVP Ryan Damon sold 1,400 shares of Criteo stock in a transaction that occurred on Thursday, March 11th. The shares were sold at an average price of $35.00, for a total transaction of $49,000.00. The transaction was disclosed in a filing with the Securities & Exchange Commission, which is available through this hyperlink. Over the last quarter, insiders have sold 4,365 shares of company stock valued at $147,845. Insiders own 4.56% of the company’s stock.

Criteo SA, a technology company, provides marketing and monetization services on the open Internet in North and South America, Europe, the Middle East, and Africa, and the Asia-Pacific. The company's Criteo Shopper Graph, which derives clients' proprietary commerce data, such as transaction activity on their digital properties. 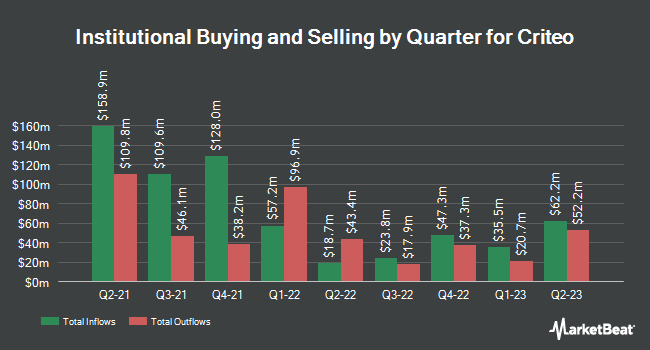 Receive News & Ratings for Criteo Daily - Enter your email address below to receive a concise daily summary of the latest news and analysts' ratings for Criteo and related companies with MarketBeat.com's FREE daily email newsletter.