Complete the form below to receive the latest headlines and analysts' recommendations for Luxfer with our free daily email newsletter:

Equities analysts expect that Luxfer Holdings PLC (NYSE:LXFR) will report sales of $92.20 million for the current fiscal quarter, according to Zacks. Three analysts have made estimates for Luxfer’s earnings. The lowest sales estimate is $88.00 million and the highest is $96.60 million. Luxfer posted sales of $89.50 million during the same quarter last year, which suggests a positive year over year growth rate of 3%. The company is scheduled to report its next earnings report on Monday, July 26th.

Luxfer (NYSE:LXFR) last issued its quarterly earnings results on Sunday, April 25th. The industrial products company reported $0.39 EPS for the quarter, beating analysts’ consensus estimates of $0.25 by $0.14. The company had revenue of $85.20 million for the quarter, compared to analyst estimates of $83.40 million. Luxfer had a return on equity of 13.81% and a net margin of 2.74%. The company’s quarterly revenue was down 3.6% compared to the same quarter last year. During the same period in the previous year, the company posted $0.34 earnings per share.

In other Luxfer news, insider James Gardella sold 20,614 shares of the business’s stock in a transaction that occurred on Tuesday, March 16th. The stock was sold at an average price of $21.35, for a total transaction of $440,108.90. The sale was disclosed in a filing with the SEC, which is accessible through the SEC website. 1.46% of the stock is owned by insiders.

The firm also recently declared a quarterly dividend, which will be paid on Wednesday, May 5th. Shareholders of record on Friday, April 16th will be given a dividend of $0.125 per share. This represents a $0.50 dividend on an annualized basis and a yield of 2.23%. The ex-dividend date of this dividend is Thursday, April 15th. Luxfer’s dividend payout ratio (DPR) is presently 38.46%.

Further Reading: What is a Roth IRA? 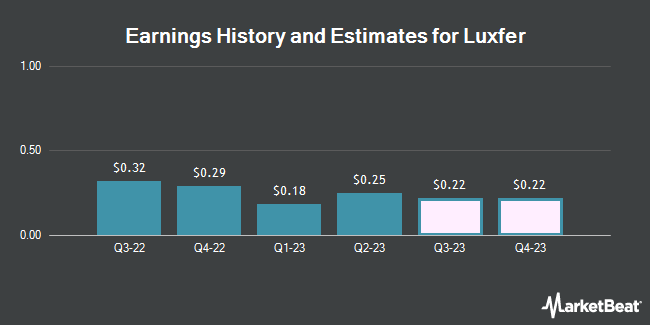 Receive News & Ratings for Luxfer Daily - Enter your email address below to receive a concise daily summary of the latest news and analysts' ratings for Luxfer and related companies with MarketBeat.com's FREE daily email newsletter.