Complete the form below to receive the latest headlines and analysts' recommendations for BP with our free daily email newsletter:

BP p.l.c. (NYSE:BP) declared a quarterly dividend on Thursday, April 29th, Wall Street Journal reports. Stockholders of record on Friday, May 7th will be given a dividend of 0.315 per share by the oil and gas exploration company on Friday, June 18th. This represents a $1.26 dividend on an annualized basis and a dividend yield of 4.90%. The ex-dividend date of this dividend is Thursday, May 6th.

BP (NYSE:BP) last announced its quarterly earnings data on Monday, April 26th. The oil and gas exploration company reported $0.78 earnings per share for the quarter, beating the Thomson Reuters’ consensus estimate of $0.43 by $0.35. BP had a negative return on equity of 3.64% and a negative net margin of 10.45%. During the same period in the prior year, the company earned $0.04 earnings per share. On average, equities research analysts predict that BP will post -1.56 EPS for the current year.

An institutional investor recently bought a new position in BP stock. OLD Mission Capital LLC bought a new stake in shares of BP p.l.c. (NYSE:BP) during the third quarter, according to the company in its most recent 13F filing with the Securities and Exchange Commission. The fund bought 304,469 shares of the oil and gas exploration company’s stock, valued at approximately $5,316,000. 7.91% of the stock is currently owned by institutional investors.

Featured Story: What is the Hang Seng index? 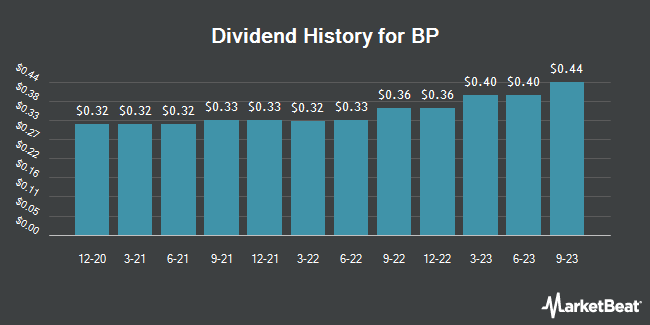 Receive News & Ratings for BP Daily - Enter your email address below to receive a concise daily summary of the latest news and analysts' ratings for BP and related companies with MarketBeat.com's FREE daily email newsletter.

UnlimitedIP Trading Down 11.7% Over Last Week

Terex Co. Given Consensus Recommendation of “Buy” by Brokerages