Complete the form below to receive the latest headlines and analysts' recommendations for HubSpot with our free daily email newsletter:

HubSpot (NYSE:HUBS) will issue its quarterly earnings data after the market closes on Wednesday, May 5th. Analysts expect the company to announce earnings of ($0.38) per share for the quarter. HubSpot has set its Q1 2021
After-Hours guidance at 0.28-0.30 EPS and its FY 2021
After-Hours guidance at 1.51-1.59 EPS.Individual that wish to listen to the company’s earnings conference call can do so using this link.

HubSpot (NYSE:HUBS) last released its quarterly earnings data on Thursday, February 11th. The software maker reported $0.40 earnings per share for the quarter, beating analysts’ consensus estimates of ($0.42) by $0.82. HubSpot had a negative net margin of 9.78% and a negative return on equity of 4.76%. The company had revenue of $252.07 million during the quarter, compared to analysts’ expectations of $236.36 million. On average, analysts expect HubSpot to post $-1 EPS for the current fiscal year and $-2 EPS for the next fiscal year. 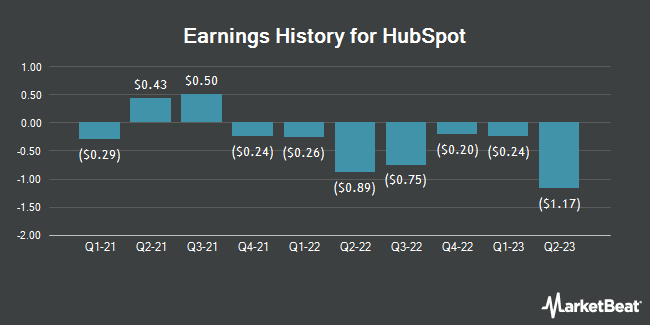 Receive News & Ratings for HubSpot Daily - Enter your email address below to receive a concise daily summary of the latest news and analysts' ratings for HubSpot and related companies with MarketBeat.com's FREE daily email newsletter.

Volkswagen Given a €290.00 Price Target by Barclays Analysts

Uniper Given a €35.00 Price Target by Kepler Capital Markets Analysts