Complete the form below to receive the latest headlines and analysts' recommendations for AeroVironment with our free daily email newsletter:

AeroVironment, Inc. (NASDAQ:AVAV) Chairman Timothy E. Conver sold 12,500 shares of AeroVironment stock in a transaction on Wednesday, April 28th. The shares were sold at an average price of $111.88, for a total transaction of $1,398,500.00. Following the sale, the chairman now directly owns 45,115 shares of the company’s stock, valued at approximately $5,047,466.20. The sale was disclosed in a document filed with the SEC, which can be accessed through the SEC website.

AeroVironment (NASDAQ:AVAV) last announced its quarterly earnings results on Tuesday, March 9th. The aerospace company reported $0.14 EPS for the quarter, beating the consensus estimate of $0.01 by $0.13. The company had revenue of $78.78 million for the quarter, compared to the consensus estimate of $75.83 million. AeroVironment had a return on equity of 7.85% and a net margin of 7.59%. The company’s revenue for the quarter was up 27.3% compared to the same quarter last year. During the same quarter last year, the company posted ($0.01) earnings per share. Sell-side analysts predict that AeroVironment, Inc. will post 1.87 earnings per share for the current fiscal year.

AeroVironment, Inc designs, develops, produces, supports, and operates a portfolio of products and services for government agencies and businesses. The company supplies unmanned aircraft systems (UAS) and related services primarily to organizations within the U.S. Department of Defense and to international allied governments; and tactical missile systems and related services to organizations within the U.S.

See Also: What are momentum indicators and what do they show? 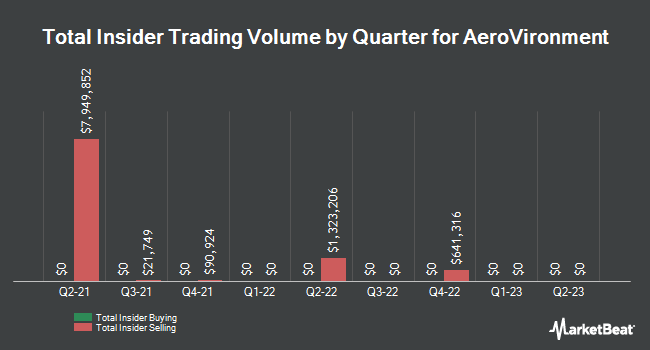