iRobot (NASDAQ:IRBT) posted its quarterly earnings data on Sunday. The industrial products company reported $0.41 earnings per share for the quarter, topping the Thomson Reuters’ consensus estimate of $0.09 by $0.32, MarketWatch Earnings reports. iRobot had a net margin of 11.72% and a return on equity of 13.69%. The company had revenue of $303.26 million for the quarter, compared to analysts’ expectations of $268.04 million. During the same period in the prior year, the business earned ($0.32) earnings per share. iRobot’s revenue for the quarter was up 57.5% compared to the same quarter last year.

A number of brokerages have recently commented on IRBT. JPMorgan Chase & Co. raised shares of iRobot from a “neutral” rating to an “overweight” rating and increased their price target for the stock from $101.00 to $166.00 in a report on Thursday, February 11th. Northland Securities raised their price target on iRobot from $120.00 to $140.00 in a research report on Friday, February 12th. Zacks Investment Research cut iRobot from a “strong-buy” rating to a “hold” rating and set a $119.00 price objective for the company. in a report on Tuesday, April 13th. Citigroup raised their price objective on iRobot from $95.00 to $140.00 and gave the company a “neutral” rating in a report on Friday, February 12th. Finally, Raymond James lowered iRobot from an “outperform” rating to a “market perform” rating in a research note on Monday, January 25th. One equities research analyst has rated the stock with a sell rating, six have given a hold rating and two have given a buy rating to the company’s stock. The stock presently has an average rating of “Hold” and an average price target of $111.00.

iRobot Corporation designs, builds, and sells robots in the United States, Europe, the Middle East, Africa, Japan, and internationally. It offers Roomba floor vacuuming robots; Braava family of automatic floor mopping robots; and Root robots to help children learn how to code. The company sells its products through distributor and retail sales channels, as well as through online stores and resellers. 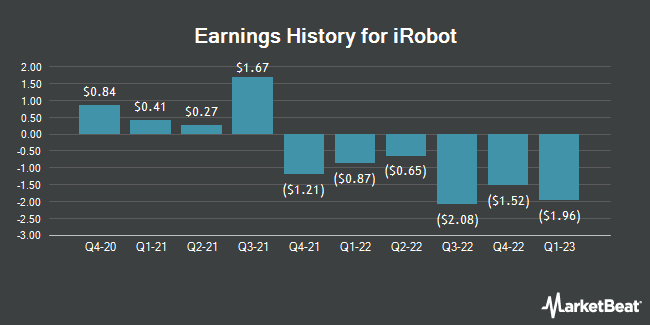 Swapcoinz Price Down 21.9% Over Last Week