Complete the form below to receive the latest headlines and analysts' recommendations for H.B. Fuller with our free daily email newsletter:

H.B. Fuller (NYSE:FUL) CEO James Owens sold 5,000 shares of the business’s stock in a transaction dated Friday, April 30th. The shares were sold at an average price of $67.48, for a total value of $337,400.00. Following the sale, the chief executive officer now owns 212,203 shares in the company, valued at approximately $14,319,458.44. The transaction was disclosed in a legal filing with the SEC, which is accessible through this hyperlink.

H.B. Fuller (NYSE:FUL) last announced its quarterly earnings data on Tuesday, March 23rd. The specialty chemicals company reported $0.66 earnings per share (EPS) for the quarter, beating the consensus estimate of $0.47 by $0.19. The business had revenue of $725.90 million for the quarter, compared to analysts’ expectations of $680.98 million. H.B. Fuller had a return on equity of 11.18% and a net margin of 4.19%. The company’s revenue for the quarter was up 12.3% compared to the same quarter last year. During the same period last year, the firm earned $0.34 earnings per share. Analysts forecast that H.B. Fuller will post 2.64 EPS for the current year.

The business also recently disclosed a quarterly dividend, which will be paid on Thursday, May 6th. Stockholders of record on Thursday, April 22nd will be paid a $0.168 dividend. This is a boost from H.B. Fuller’s previous quarterly dividend of $0.16. This represents a $0.67 annualized dividend and a dividend yield of 0.99%. The ex-dividend date is Wednesday, April 21st. H.B. Fuller’s dividend payout ratio (DPR) is presently 22.64%.

FUL has been the topic of several research analyst reports. Deutsche Bank Aktiengesellschaft boosted their price target on H.B. Fuller from $56.00 to $65.00 and gave the company a “hold” rating in a research note on Monday, March 29th. Robert W. Baird boosted their price objective on H.B. Fuller from $65.00 to $72.00 and gave the company an “outperform” rating in a report on Friday, March 26th. They noted that the move was a valuation call. Finally, Zacks Investment Research raised H.B. Fuller from a “hold” rating to a “buy” rating and set a $71.00 price objective for the company in a report on Tuesday, March 30th. Three investment analysts have rated the stock with a hold rating and four have issued a buy rating to the company. H.B. Fuller presently has an average rating of “Buy” and a consensus target price of $61.50.

Further Reading: What are the components of an earnings report? 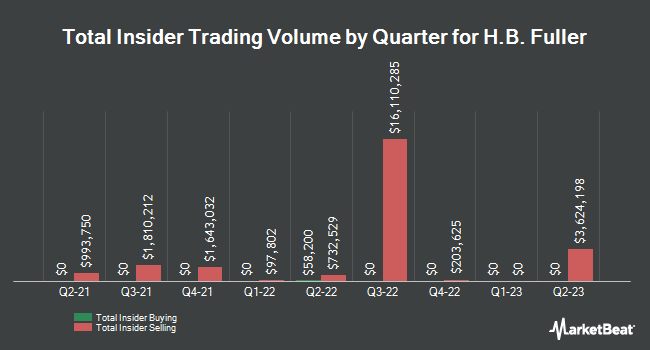