Complete the form below to receive the latest headlines and analysts' recommendations for Stryker with our free daily email newsletter:

$4.11 Billion in Sales Expected for Stryker Co. (NYSE:SYK) This Quarter

Equities research analysts expect that Stryker Co. (NYSE:SYK) will announce sales of $4.11 billion for the current fiscal quarter, Zacks reports. Eleven analysts have issued estimates for Stryker’s earnings, with the lowest sales estimate coming in at $3.90 billion and the highest estimate coming in at $4.25 billion. Stryker reported sales of $2.76 billion during the same quarter last year, which would suggest a positive year over year growth rate of 48.9%. The business is expected to report its next quarterly earnings report on Thursday, July 29th.

According to Zacks, analysts expect that Stryker will report full year sales of $17.13 billion for the current financial year, with estimates ranging from $16.94 billion to $17.29 billion. For the next financial year, analysts forecast that the business will report sales of $18.28 billion, with estimates ranging from $18.02 billion to $18.48 billion. Zacks Investment Research’s sales averages are a mean average based on a survey of research analysts that follow Stryker.

Stryker (NYSE:SYK) last released its quarterly earnings data on Monday, April 26th. The medical technology company reported $1.93 EPS for the quarter, missing the consensus estimate of $1.99 by ($0.06). Stryker had a return on equity of 20.94% and a net margin of 12.35%. The business had revenue of $3.95 billion during the quarter, compared to analysts’ expectations of $3.94 billion. During the same quarter in the prior year, the firm earned $1.84 earnings per share. Stryker’s quarterly revenue was up 10.2% on a year-over-year basis.

Stryker Corp. engages in the provision of medical technology products and services. It operates through the following segments: Orthopaedics, MedSurg and Neurotechnology and Spine. The Orthopaedics segment provides reconstructive and trauma implant systems. The MedSurg segment deals with surgical equipment and navigation systems, endoscopy, patient handling and reprocessed medical devices. 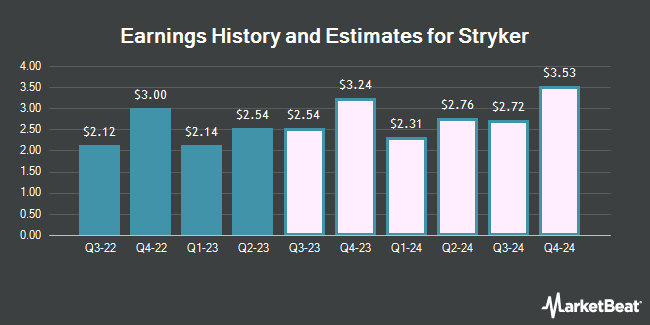 Receive News & Ratings for Stryker Daily - Enter your email address below to receive a concise daily summary of the latest news and analysts' ratings for Stryker and related companies with MarketBeat.com's FREE daily email newsletter.

$4.11 Billion in Sales Expected for Stryker Co. This Quarter