Complete the form below to receive the latest headlines and analysts' recommendations for Bally's with our free daily email newsletter:

Equities analysts expect Bally’s Co. (NYSE:BALY) to post $186.98 million in sales for the current fiscal quarter, according to Zacks Investment Research. Four analysts have made estimates for Bally’s’ earnings, with the highest sales estimate coming in at $188.20 million and the lowest estimate coming in at $185.40 million. Bally’s posted sales of $109.15 million in the same quarter last year, which suggests a positive year-over-year growth rate of 71.3%. The business is expected to report its next quarterly earnings results before the market opens on Monday, May 10th.

According to Zacks, analysts expect that Bally’s will report full-year sales of $894.75 million for the current year, with estimates ranging from $688.75 million to $1.02 billion. For the next fiscal year, analysts forecast that the company will report sales of $1.20 billion, with estimates ranging from $813.56 million to $1.38 billion. Zacks’ sales calculations are an average based on a survey of sell-side research firms that that provide coverage for Bally’s.

Recommended Story: What is the 52-week high/low? 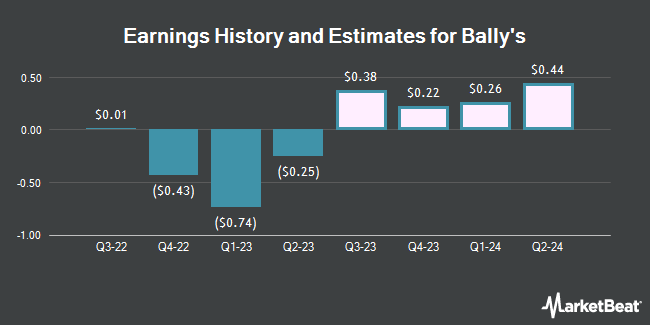 Receive News & Ratings for Bally's Daily - Enter your email address below to receive a concise daily summary of the latest news and analysts' ratings for Bally's and related companies with MarketBeat.com's FREE daily email newsletter.