Complete the form below to receive the latest headlines and analysts' recommendations for Akouos with our free daily email newsletter:

Akouos, Inc. (NASDAQ:AKUS) has been assigned an average recommendation of “Buy” from the six research firms that are covering the stock, MarketBeat reports. Two investment analysts have rated the stock with a hold recommendation and four have given a buy recommendation to the company. The average 1 year price target among analysts that have covered the stock in the last year is $30.00.

Akouos (NASDAQ:AKUS) last announced its quarterly earnings results on Sunday, March 28th. The company reported ($0.37) earnings per share (EPS) for the quarter, beating the consensus estimate of ($0.46) by $0.09. Research analysts anticipate that Akouos will post -2.96 earnings per share for the current year.

Akouos, Inc, a precision genetic medicine company, developing gene therapies to restore, improve, and preserve physiologic hearing for individuals. The company's precision genetic medicine platform incorporates a proprietary adeno-associated viral vector library and a novel delivery approach. Its lead product candidate is AK-OTOF, a gene therapy for the treatment of hearing loss due to mutations in the OTOF gene. 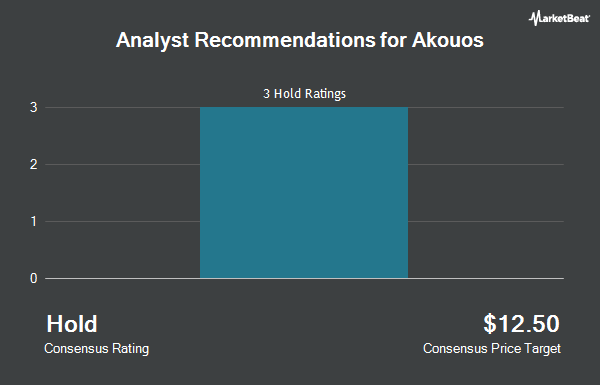 Receive News & Ratings for Akouos Daily - Enter your email address below to receive a concise daily summary of the latest news and analysts' ratings for Akouos and related companies with MarketBeat.com's FREE daily email newsletter.