Complete the form below to receive the latest headlines and analysts' recommendations for FedNat with our free daily email newsletter:

Wall Street analysts expect FedNat Holding (NASDAQ:FNHC) to post $75.11 million in sales for the current fiscal quarter, Zacks reports. Two analysts have issued estimates for FedNat’s earnings. The highest sales estimate is $85.44 million and the lowest is $64.78 million. FedNat reported sales of $115.06 million during the same quarter last year, which would suggest a negative year-over-year growth rate of 34.7%. The company is expected to issue its next quarterly earnings results after the market closes on Tuesday, May 4th.

According to Zacks, analysts expect that FedNat will report full year sales of $314.29 million for the current financial year, with estimates ranging from $276.79 million to $351.79 million. For the next financial year, analysts anticipate that the firm will post sales of $335.03 million, with estimates ranging from $293.83 million to $376.23 million. Zacks’ sales averages are a mean average based on a survey of research analysts that cover FedNat.

FedNat (NASDAQ:FNHC) last announced its earnings results on Monday, March 1st. The insurance provider reported ($1.96) earnings per share (EPS) for the quarter, beating analysts’ consensus estimates of ($2.65) by $0.69. The company had revenue of $76.05 million for the quarter, compared to analyst estimates of $89.89 million. FedNat had a negative return on equity of 23.37% and a negative net margin of 10.30%.

FedNat Holding Company, together with its subsidiaries, engages in the insurance underwriting, distribution, and claims processing business in Florida, Louisiana, Texas, Georgia, South Carolina, Alabama, and Mississippi. The company is involved in the homeowners and casualty insurance; and personal automobile insurance businesses, as well as commercial general liability and federal flood businesses. 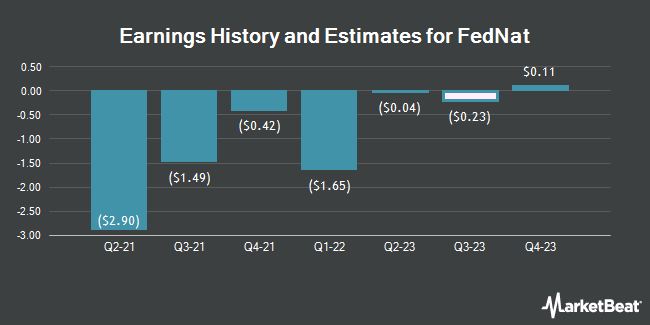 Receive News & Ratings for FedNat Daily - Enter your email address below to receive a concise daily summary of the latest news and analysts' ratings for FedNat and related companies with MarketBeat.com's FREE daily email newsletter.