On average, analysts expect that Allegiance Bancshares will report full year sales of $230.37 million for the current year, with estimates ranging from $222.20 million to $236.20 million. For the next financial year, analysts expect that the company will post sales of $224.40 million, with estimates ranging from $219.20 million to $228.40 million. Zacks Investment Research’s sales averages are a mean average based on a survey of sell-side research analysts that that provide coverage for Allegiance Bancshares.

Allegiance Bancshares (NASDAQ:ABTX) last announced its earnings results on Wednesday, April 28th. The bank reported $0.89 EPS for the quarter, beating the Zacks’ consensus estimate of $0.83 by $0.06. Allegiance Bancshares had a net margin of 17.69% and a return on equity of 6.00%.

Separately, Zacks Investment Research upgraded shares of Allegiance Bancshares from a “hold” rating to a “buy” rating and set a $45.00 price target on the stock in a research note on Thursday, April 29th.

The firm also recently announced a quarterly dividend, which will be paid on Tuesday, June 15th. Shareholders of record on Friday, May 28th will be given a $0.12 dividend. This represents a $0.48 dividend on an annualized basis and a yield of 1.17%. The ex-dividend date is Thursday, May 27th. Allegiance Bancshares’s dividend payout ratio (DPR) is 18.68%.

In other Allegiance Bancshares news, Director Roland L. Williams sold 1,600 shares of the business’s stock in a transaction dated Tuesday, February 16th. The stock was sold at an average price of $36.59, for a total value of $58,544.00. Following the completion of the transaction, the director now owns 96,519 shares of the company’s stock, valued at approximately $3,531,630.21. The sale was disclosed in a legal filing with the SEC, which is available through this link. In the last three months, insiders sold 8,000 shares of company stock valued at $314,752. 8.57% of the stock is owned by insiders.

Further Reading: What does an equal weight rating mean? 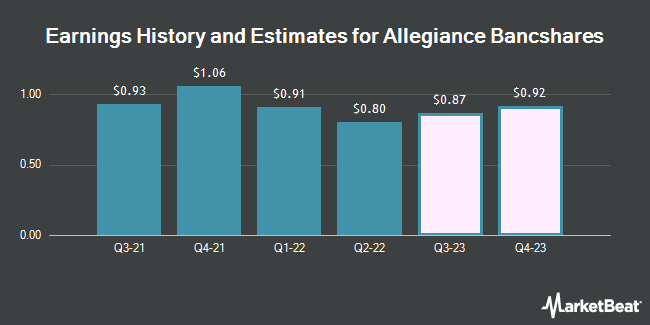 Complete the form below to receive the latest headlines and analysts' recommendations for Allegiance Bancshares with our free daily email newsletter: