Velodyne Lidar (NASDAQ:VLDR) had its price objective reduced by analysts at Needham & Company LLC from $20.00 to $15.00 in a research report issued to clients and investors on Monday, Benzinga reports. The brokerage currently has a “buy” rating on the stock. Needham & Company LLC’s price target indicates a potential upside of 54.96% from the company’s current price.

Velodyne Lidar (NASDAQ:VLDR) last announced its earnings results on Monday, May 10th. The company reported ($0.14) earnings per share (EPS) for the quarter, missing the Thomson Reuters’ consensus estimate of ($0.12) by ($0.02). The company had revenue of $17.70 million during the quarter, compared to analyst estimates of $14.90 million. The firm’s revenue was up 3.9% compared to the same quarter last year. During the same period in the prior year, the company posted ($0.19) earnings per share. As a group, analysts expect that Velodyne Lidar will post -1.49 EPS for the current year.

Featured Article: How is the discount rate different from the Federal Funds rate? 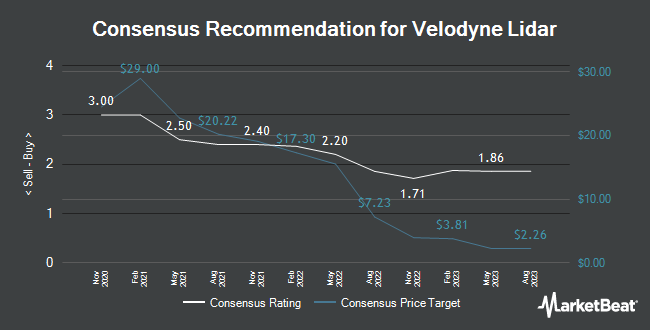 Sport and Leisure Trading Up 7.5% Over Last Week

Complete the form below to receive the latest headlines and analysts' recommendations for Velodyne Lidar with our free daily email newsletter: