According to Zacks, analysts expect that C.H. Robinson Worldwide will report full year sales of $18.28 billion for the current fiscal year, with estimates ranging from $17.52 billion to $19.13 billion. For the next financial year, analysts expect that the company will post sales of $18.16 billion, with estimates ranging from $15.90 billion to $19.28 billion. Zacks’ sales calculations are an average based on a survey of sell-side research firms that cover C.H. Robinson Worldwide.

C.H. Robinson Worldwide (NASDAQ:CHRW) last released its quarterly earnings results on Tuesday, April 27th. The transportation company reported $1.28 earnings per share (EPS) for the quarter, topping analysts’ consensus estimates of $0.98 by $0.30. The firm had revenue of $4.80 billion for the quarter, compared to the consensus estimate of $4.37 billion. C.H. Robinson Worldwide had a return on equity of 32.85% and a net margin of 3.50%. The firm’s quarterly revenue was up 26.3% compared to the same quarter last year. During the same quarter last year, the business posted $0.57 EPS.

The business also recently announced a quarterly dividend, which will be paid on Thursday, July 1st. Investors of record on Friday, June 4th will be paid a $0.51 dividend. This represents a $2.04 dividend on an annualized basis and a yield of 2.06%. The ex-dividend date is Thursday, June 3rd. C.H. Robinson Worldwide’s payout ratio is currently 54.84%.

C.H. Robinson Worldwide, Inc, together with its subsidiaries, provides freight transportation services and logistics solutions to companies in various industries worldwide. The company operates through two segments, North American Surface Transportation and Global Forwarding. It offers transportation and logistics services, such as truckload; less than truckload transportation, which include the shipment of single or multiple pallets of freight; intermodal transportation that include the shipment service of freight in trailers or containers by a combination of truck and rail; and non-vessel ocean common carrier and freight forwarding services, as well as organizes air shipments and offers door-to-door services.

Get a free copy of the Zacks research report on C.H. Robinson Worldwide (CHRW) 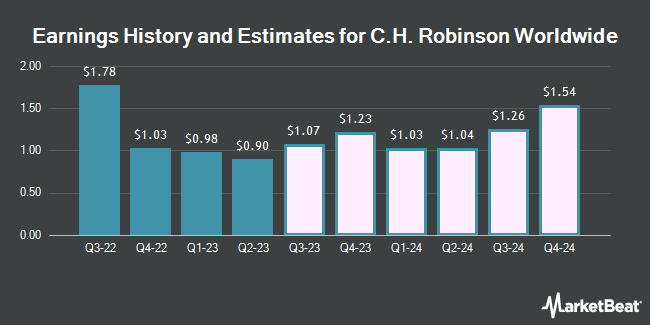 BioLife Solutions, Inc. Expected to Announce Earnings of -$0.05 Per Share

Complete the form below to receive the latest headlines and analysts' recommendations for C.H. Robinson Worldwide with our free daily email newsletter: