QUALCOMM (NASDAQ:QCOM) had its price target raised by research analysts at Canaccord Genuity from $188.00 to $195.00 in a report released on Thursday, The Fly reports. The firm currently has a “buy” rating on the wireless technology company’s stock. Canaccord Genuity’s target price would suggest a potential upside of 37.16% from the company’s current price.

QUALCOMM (NASDAQ:QCOM) last released its earnings results on Wednesday, April 28th. The wireless technology company reported $1.90 EPS for the quarter, beating the consensus estimate of $1.41 by $0.49. QUALCOMM had a net margin of 27.28% and a return on equity of 103.71%. The business had revenue of $7.93 billion during the quarter, compared to analyst estimates of $7.62 billion. During the same period in the prior year, the business earned $0.88 earnings per share. The business’s quarterly revenue was up 52.2% on a year-over-year basis. As a group, equities research analysts forecast that QUALCOMM will post 6.65 earnings per share for the current year.

QUALCOMM, Inc engages in the development, design, and provision of digital telecommunications products and services. It operates through the following segments: Qualcomm CDMA Technologies (QCT), Qualcomm Technology Licensing (QTL), and Qualcomm Strategic Initiatives (QSI). The QCT segment develops and supplies integrated circuits and system software based on technologies for the use in voice and data communications, networking, application processing, multimedia, and global positioning system products.

Featured Article: What is a back-end load? 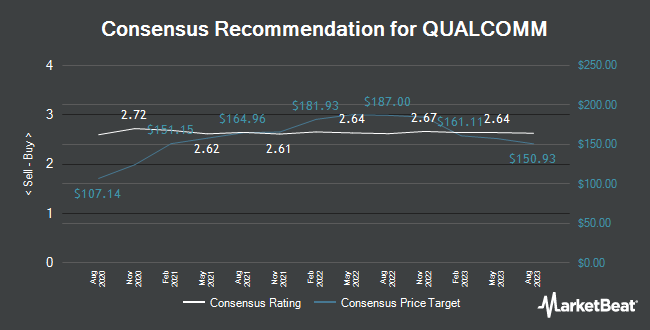 Receive News & Ratings for QUALCOMM Daily - Enter your email address below to receive a concise daily summary of the latest news and analysts' ratings for QUALCOMM and related companies with MarketBeat.com's FREE daily email newsletter.

Flexacoin Trading Down 3.1% This Week

Complete the form below to receive the latest headlines and analysts' recommendations for QUALCOMM with our free daily email newsletter: