Knight-Swift Transportation (NYSE:KNX) had its price target reduced by research analysts at Susquehanna from $51.00 to $49.00 in a research report issued on Thursday, Briefing.com reports. The brokerage presently has a “neutral” rating on the transportation company’s stock. Susquehanna’s price target would suggest a potential upside of 0.95% from the stock’s current price.

In other Knight-Swift Transportation news, EVP James E. Jr. Updike sold 2,250 shares of the stock in a transaction dated Wednesday, May 5th. The stock was sold at an average price of $48.85, for a total value of $109,912.50. Following the completion of the transaction, the executive vice president now directly owns 15,270 shares in the company, valued at $745,939.50. The transaction was disclosed in a filing with the Securities & Exchange Commission, which is available through the SEC website. Company insiders own 27.50% of the company’s stock.

Further Reading: Options Trading – What is a Straddle? 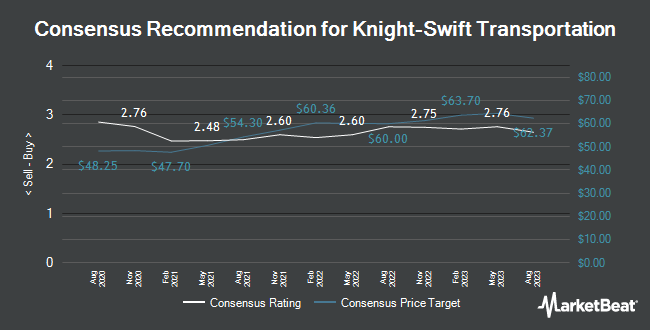 Complete the form below to receive the latest headlines and analysts' recommendations for Knight-Swift Transportation with our free daily email newsletter: