Alpha DNA Investment Management LLC acquired a new stake in Leslie’s, Inc. (NASDAQ:LESL) in the 2nd quarter, according to its most recent disclosure with the SEC. The fund acquired 49,215 shares of the company’s stock, valued at approximately $1,352,000.

Leslie’s (NASDAQ:LESL) last posted its quarterly earnings results on Wednesday, August 4th. The company reported $0.64 EPS for the quarter, topping the Zacks’ consensus estimate of $0.56 by $0.08. The company had revenue of $596.50 million during the quarter, compared to the consensus estimate of $571.81 million. During the same period in the previous year, the business earned $0.47 earnings per share. Leslie’s’s revenue was up 24.3% on a year-over-year basis. On average, research analysts forecast that Leslie’s, Inc. will post 0.74 earnings per share for the current year.

Leslie's, Inc operates as a direct-to-consumer pool and spa care brand in the United States. The company markets and sells pool and spa supplies and related products and services, which primarily consist of maintenance items, such as chemicals, equipment and parts, and cleaning and maintenance equipment, as well as safety, recreational, and fitness-related products.

Want to see what other hedge funds are holding LESL? Visit HoldingsChannel.com to get the latest 13F filings and insider trades for Leslie’s, Inc. (NASDAQ:LESL). 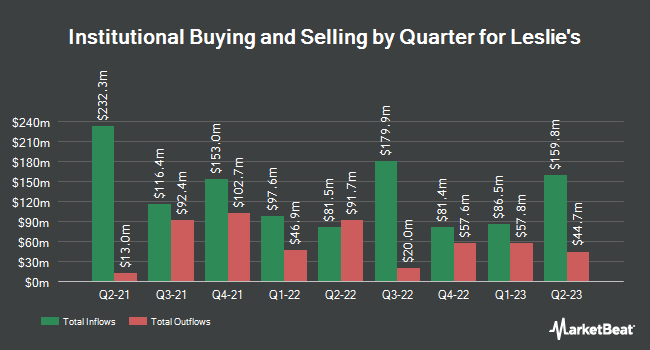 Receive News & Ratings for Leslie's Daily - Enter your email address below to receive a concise daily summary of the latest news and analysts' ratings for Leslie's and related companies with MarketBeat.com's FREE daily email newsletter.

Complete the form below to receive the latest headlines and analysts' recommendations for Leslie's with our free daily email newsletter: