Evolution Petroleum (NYSEAMERICAN:EPM) issued its earnings results on Sunday. The energy company reported $0.07 earnings per share (EPS) for the quarter, missing the consensus estimate of $0.09 by ($0.02), Fidelity Earnings reports. Evolution Petroleum had a negative return on equity of 0.48% and a negative net margin of 93.88%. During the same quarter in the prior year, the company posted ($0.03) earnings per share.

An institutional investor recently raised its position in Evolution Petroleum stock. Morgan Stanley raised its position in shares of Evolution Petroleum Co. (NYSEAMERICAN:EPM) by 149.0% in the second quarter, according to the company in its most recent filing with the Securities & Exchange Commission. The firm owned 191,232 shares of the energy company’s stock after purchasing an additional 114,433 shares during the quarter. Morgan Stanley owned 0.57% of Evolution Petroleum worth $948,000 as of its most recent SEC filing. 63.81% of the stock is currently owned by institutional investors.

Featured Story: How much money do you need to begin day trading? 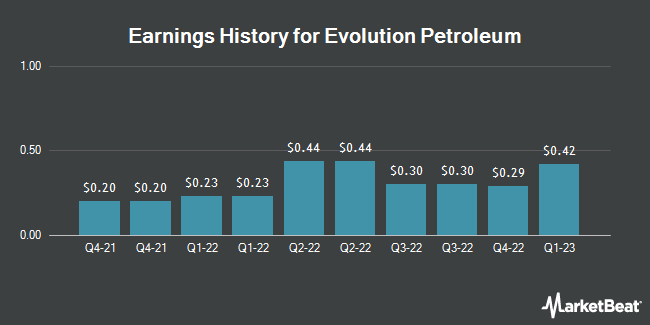 Porch Group, Inc. Expected to Announce Earnings of -$0.16 Per Share

Complete the form below to receive the latest headlines and analysts' recommendations for Evolution Petroleum with our free daily email newsletter: