Brokerages predict that Exterran Co. (NYSE:EXTN) will report sales of $165.17 million for the current quarter, Zacks reports. Three analysts have made estimates for Exterran’s earnings. The highest sales estimate is $173.00 million and the lowest is $151.50 million. Exterran reported sales of $169.51 million during the same quarter last year, which would suggest a negative year over year growth rate of 2.6%. The company is scheduled to announce its next earnings results on Monday, November 1st.

On average, analysts expect that Exterran will report full-year sales of $640.77 million for the current fiscal year, with estimates ranging from $611.90 million to $658.00 million. For the next financial year, analysts forecast that the firm will report sales of $773.53 million, with estimates ranging from $716.90 million to $854.00 million. Zacks Investment Research’s sales averages are an average based on a survey of research firms that cover Exterran.

Exterran (NYSE:EXTN) last issued its quarterly earnings data on Sunday, August 8th. The energy company reported ($0.83) earnings per share (EPS) for the quarter, missing the Thomson Reuters’ consensus estimate of ($0.67) by ($0.16). The company had revenue of $146.20 million during the quarter, compared to analysts’ expectations of $148.90 million. Exterran had a negative net margin of 19.25% and a negative return on equity of 34.14%.

Separately, Zacks Investment Research upgraded Exterran from a “sell” rating to a “hold” rating in a research note on Monday, August 16th.

See Also: How to start trading in the forex market? 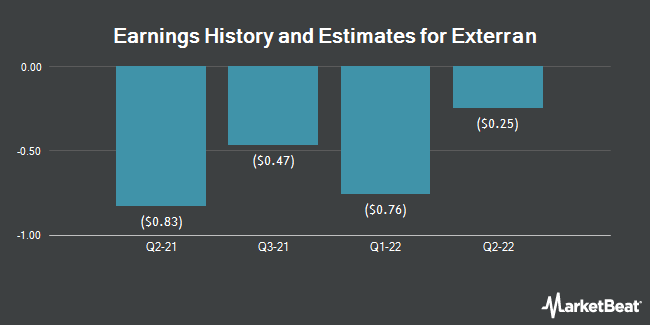 Receive News & Ratings for Exterran Daily - Enter your email address below to receive a concise daily summary of the latest news and analysts' ratings for Exterran and related companies with MarketBeat.com's FREE daily email newsletter.

Complete the form below to receive the latest headlines and analysts' recommendations for Exterran with our free daily email newsletter: