Shares of Five9, Inc. (NASDAQ:FIVN) have been assigned a consensus rating of “Hold” from the twenty-two ratings firms that are currently covering the company, Marketbeat Ratings reports. One equities research analyst has rated the stock with a sell recommendation, sixteen have issued a hold recommendation and five have assigned a buy recommendation to the company. The average 1 year price target among analysts that have issued ratings on the stock in the last year is $201.87.

Five9 (NASDAQ:FIVN) last announced its earnings results on Tuesday, July 27th. The software maker reported $0.23 EPS for the quarter, topping the Zacks’ consensus estimate of $0.14 by $0.09. Five9 had a negative return on equity of 2.67% and a negative net margin of 9.11%. The company had revenue of $143.78 million for the quarter, compared to analysts’ expectations of $132.46 million. During the same period last year, the firm earned $0.21 EPS. Five9’s revenue for the quarter was up 44.1% compared to the same quarter last year. On average, analysts predict that Five9 will post -0.22 earnings per share for the current year.

Five9, Inc engages in the provision of cloud software for contact centers. It specializes in omnichannel routing, analytics, workforce organization and reporting. The company was founded in December 2001 and is headquartered in San Ramon, CA. 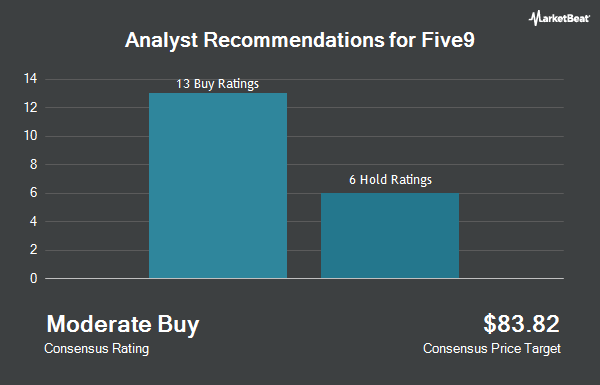 Receive News & Ratings for Five9 Daily - Enter your email address below to receive a concise daily summary of the latest news and analysts' ratings for Five9 and related companies with MarketBeat.com's FREE daily email newsletter.

Complete the form below to receive the latest headlines and analysts' recommendations for Five9 with our free daily email newsletter: