Wall Street analysts forecast that Ventas, Inc. (NYSE:VTR) will report sales of $936.77 million for the current fiscal quarter, Zacks reports. Three analysts have made estimates for Ventas’ earnings. The lowest sales estimate is $924.60 million and the highest is $946.00 million. Ventas posted sales of $918.94 million in the same quarter last year, which would indicate a positive year-over-year growth rate of 1.9%. The firm is expected to report its next quarterly earnings results on Friday, November 5th.

On average, analysts expect that Ventas will report full year sales of $3.71 billion for the current year, with estimates ranging from $3.66 billion to $3.79 billion. For the next fiscal year, analysts forecast that the business will post sales of $4.00 billion, with estimates ranging from $3.82 billion to $4.23 billion. Zacks Investment Research’s sales calculations are an average based on a survey of sell-side research firms that follow Ventas.

Ventas (NYSE:VTR) last posted its earnings results on Friday, August 6th. The real estate investment trust reported $0.73 earnings per share for the quarter, topping the Zacks’ consensus estimate of $0.72 by $0.01. Ventas had a net margin of 4.15% and a return on equity of 1.50%. The company had revenue of $919.20 million for the quarter, compared to analyst estimates of $903.94 million. During the same quarter in the prior year, the business posted ($0.43) EPS. The firm’s revenue was down 2.5% compared to the same quarter last year.

The firm also recently announced a quarterly dividend, which will be paid on Thursday, October 14th. Investors of record on Friday, October 1st will be given a $0.45 dividend. This represents a $1.80 dividend on an annualized basis and a yield of 3.14%. Ventas’s payout ratio is presently 54.22%.

Ventas, Inc engages in the acquisition and ownership of seniors housing and healthcare properties. The company invests in seniors housing and healthcare properties through acquisitions and leases its properties to unaffiliated tenants or operate them through independent third-party managers. It operates through the following segments: Triple-Net Leased Properties, Senior Living Operations, and Office Operations.

See Also: How to Invest in Growth Stocks 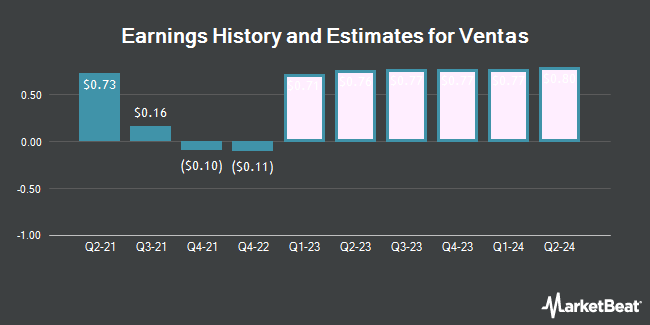 Receive News & Ratings for Ventas Daily - Enter your email address below to receive a concise daily summary of the latest news and analysts' ratings for Ventas and related companies with MarketBeat.com's FREE daily email newsletter.

Complete the form below to receive the latest headlines and analysts' recommendations for Ventas with our free daily email newsletter: