Brokerages expect Advanced Micro Devices, Inc. (NASDAQ:AMD) to report $4.12 billion in sales for the current fiscal quarter, Zacks Investment Research reports. Ten analysts have made estimates for Advanced Micro Devices’ earnings. The highest sales estimate is $4.19 billion and the lowest is $4.10 billion. Advanced Micro Devices posted sales of $2.80 billion in the same quarter last year, which would indicate a positive year over year growth rate of 47.1%. The firm is scheduled to issue its next quarterly earnings report on Tuesday, October 26th.

According to Zacks, analysts expect that Advanced Micro Devices will report full-year sales of $15.66 billion for the current year, with estimates ranging from $15.60 billion to $15.93 billion. For the next fiscal year, analysts anticipate that the company will report sales of $17.93 billion, with estimates ranging from $17.27 billion to $18.80 billion. Zacks’ sales calculations are a mean average based on a survey of sell-side research analysts that follow Advanced Micro Devices.

Advanced Micro Devices (NASDAQ:AMD) last posted its quarterly earnings data on Monday, July 26th. The semiconductor manufacturer reported $0.63 earnings per share (EPS) for the quarter, topping the Thomson Reuters’ consensus estimate of $0.54 by $0.09. The company had revenue of $3.85 billion for the quarter, compared to analysts’ expectations of $3.61 billion. Advanced Micro Devices had a return on equity of 39.20% and a net margin of 25.76%. Advanced Micro Devices’s revenue was up 99.3% compared to the same quarter last year. During the same period in the previous year, the firm posted $0.18 EPS.

Advanced Micro Devices, Inc engages in the provision of semiconductor businesses. It operates through the following segments: Computing & Graphics, and Enterprise, Embedded and Semi-Custom. The Computing and Graphics segment includes desktop and notebook processors and chipsets, discrete and integrated graphics processing units, data center and professional GPUs and development services.

See Also: What are the disadvantages of after-hours trading? 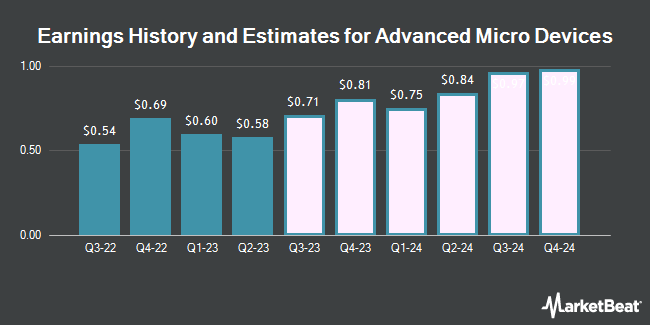 -$0.32 Earnings Per Share Expected for TRACON Pharmaceuticals, Inc. This Quarter