$0.47 Earnings Per Share Expected for Cognex Co. (NASDAQ:CGNX) This Quarter

Equities analysts expect that Cognex Co. (NASDAQ:CGNX) will post earnings per share (EPS) of $0.47 for the current quarter, according to Zacks Investment Research. Two analysts have made estimates for Cognex’s earnings, with the lowest EPS estimate coming in at $0.44 and the highest estimate coming in at $0.53. Cognex posted earnings per share of $0.49 in the same quarter last year, which suggests a negative year over year growth rate of 4.1%. The company is scheduled to issue its next earnings results on Wednesday, October 27th.

On average, analysts expect that Cognex will report full year earnings of $1.58 per share for the current year, with EPS estimates ranging from $1.53 to $1.62. For the next year, analysts expect that the firm will report earnings of $1.93 per share, with EPS estimates ranging from $1.70 to $2.20. Zacks’ earnings per share averages are an average based on a survey of sell-side research firms that follow Cognex.

Cognex (NASDAQ:CGNX) last released its quarterly earnings results on Thursday, August 5th. The scientific and technical instruments company reported $0.43 EPS for the quarter, topping the consensus estimate of $0.38 by $0.05. Cognex had a return on equity of 21.92% and a net margin of 30.96%. The business had revenue of $269.16 million during the quarter, compared to analyst estimates of $263.11 million.

The firm also recently declared a quarterly dividend, which was paid on Friday, September 3rd. Shareholders of record on Friday, August 20th were paid a $0.06 dividend. This represents a $0.24 dividend on an annualized basis and a yield of 0.26%. The ex-dividend date of this dividend was Thursday, August 19th. Cognex’s dividend payout ratio is presently 24.00%.

Cognex Corp. engages in the provision of machine vision products that capture and analyze visual information in order to automate tasks in processes, where vision is required. The company was founded by Robert J. Shillman, William Silver and Marilyn Matz in 1981 and is headquartered in Natick, MA. 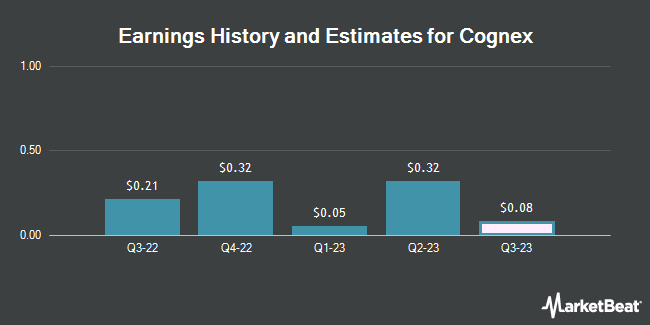