Nisa Investment Advisors LLC lowered its holdings in Hilton Grand Vacations Inc. (NYSE:HGV) by 74.5% during the 2nd quarter, according to the company in its most recent disclosure with the Securities & Exchange Commission. The firm owned 3,860 shares of the company’s stock after selling 11,290 shares during the period. Nisa Investment Advisors LLC’s holdings in Hilton Grand Vacations were worth $160,000 at the end of the most recent quarter.

Separately, Zacks Investment Research raised shares of Hilton Grand Vacations from a “sell” rating to a “hold” rating in a report on Thursday, August 19th.

Hilton Grand Vacations, Inc engages in marketing and sale of vacation ownership interval and management of resorts in urban destinations. It operates through the Real Estate Sales and Financing; and Resort Operations and Club Management segments. The Real Estate Sales and Financing segment refers to the sale of vacation ownership intervals on behalf of third-party developers using the Hilton Grand Vacations brand in exchange for sales, marketing and brand fees, and the financing solutions.

Want to see what other hedge funds are holding HGV? Visit HoldingsChannel.com to get the latest 13F filings and insider trades for Hilton Grand Vacations Inc. (NYSE:HGV). 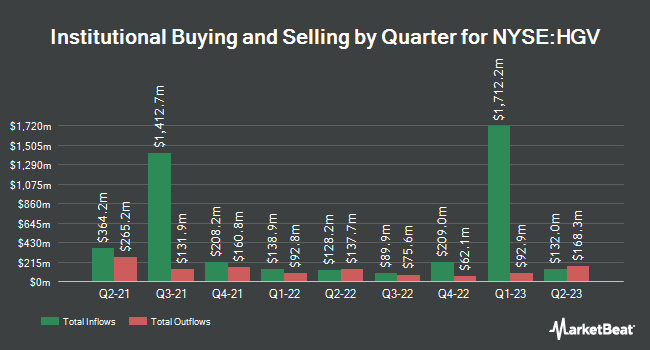 Complete the form below to receive the latest headlines and analysts' recommendations for Hilton Grand Vacations with our free daily email newsletter: