O Shaughnessy Asset Management LLC increased its position in shares of Nevro Corp. (NYSE:NVRO) by 24.4% during the 2nd quarter, Holdings Channel reports. The institutional investor owned 2,525 shares of the medical equipment provider’s stock after purchasing an additional 495 shares during the quarter. O Shaughnessy Asset Management LLC’s holdings in Nevro were worth $418,000 at the end of the most recent quarter.

In other news, CEO D Keith Grossman bought 7,000 shares of the stock in a transaction that occurred on Friday, August 13th. The stock was purchased at an average price of $105.07 per share, for a total transaction of $735,490.00. The purchase was disclosed in a legal filing with the Securities & Exchange Commission, which is available at this link. Also, Director Michael F. Demane sold 6,445 shares of the business’s stock in a transaction on Tuesday, June 22nd. The shares were sold at an average price of $179.03, for a total transaction of $1,153,848.35. The disclosure for this sale can be found here. Insiders own 2.60% of the company’s stock.

Nevro (NYSE:NVRO) last posted its quarterly earnings results on Wednesday, August 4th. The medical equipment provider reported ($0.62) EPS for the quarter, topping the Thomson Reuters’ consensus estimate of ($0.71) by $0.09. The business had revenue of $102.30 million during the quarter, compared to the consensus estimate of $102.83 million. Nevro had a negative net margin of 16.68% and a negative return on equity of 18.29%. The company’s quarterly revenue was up 81.4% compared to the same quarter last year. During the same quarter in the previous year, the firm posted ($1.21) earnings per share. On average, analysts expect that Nevro Corp. will post -2.89 EPS for the current year.

Nevro Corp. engages in the provision of medical devices. The firm focuses on providing products that improve the quality of life of patients suffering from debilitating chronic pain. It develops and commercializes senza spinal cord stimulation system, an evidence-based neuromodulation platform for the treatment of chronic pain.

Want to see what other hedge funds are holding NVRO? Visit HoldingsChannel.com to get the latest 13F filings and insider trades for Nevro Corp. (NYSE:NVRO). 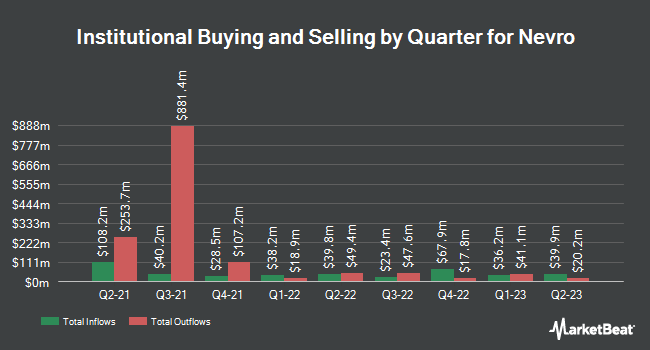 Receive News & Ratings for Nevro Daily - Enter your email address below to receive a concise daily summary of the latest news and analysts' ratings for Nevro and related companies with MarketBeat.com's FREE daily email newsletter.

Complete the form below to receive the latest headlines and analysts' recommendations for Nevro with our free daily email newsletter: