Wall Street analysts predict that Curtiss-Wright Co. (NYSE:CW) will post $612.37 million in sales for the current quarter, according to Zacks Investment Research. Three analysts have made estimates for Curtiss-Wright’s earnings, with estimates ranging from $601.00 million to $622.51 million. Curtiss-Wright posted sales of $571.61 million during the same quarter last year, which would indicate a positive year-over-year growth rate of 7.1%. The business is scheduled to issue its next quarterly earnings results on Wednesday, October 27th.

On average, analysts expect that Curtiss-Wright will report full-year sales of $2.51 billion for the current year, with estimates ranging from $2.50 billion to $2.53 billion. For the next fiscal year, analysts expect that the business will report sales of $2.64 billion, with estimates ranging from $2.61 billion to $2.66 billion. Zacks Investment Research’s sales averages are a mean average based on a survey of research analysts that cover Curtiss-Wright.

Curtiss-Wright (NYSE:CW) last announced its earnings results on Tuesday, August 3rd. The aerospace company reported $1.56 earnings per share (EPS) for the quarter, topping analysts’ consensus estimates of $1.54 by $0.02. The company had revenue of $621.50 million for the quarter, compared to analyst estimates of $589.85 million. Curtiss-Wright had a return on equity of 16.54% and a net margin of 9.74%.

Curtiss-Wright Corp. is a manufacturing and service company, which engages in the design, manufacture and overhaul of precision components; and provides engineered products & services to the aerospace, defense, power generation and general industrial markets. It operates through the following segments: Commercial/Industrial, Defense, and Power. 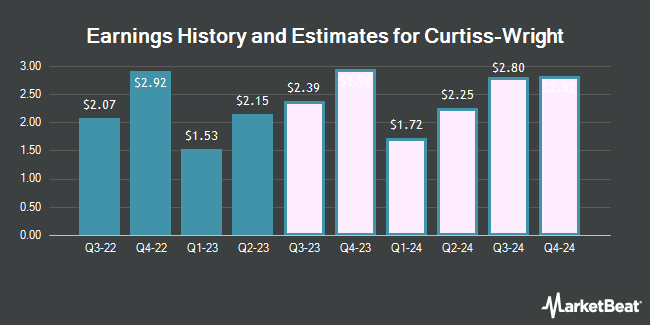 Sandstorm Gold Ltd. Expected to Announce Earnings of $0.04 Per Share

Complete the form below to receive the latest headlines and analysts' recommendations for Curtiss-Wright with our free daily email newsletter: