Equities analysts forecast that ObsEva SA (NASDAQ:OBSV) will report earnings per share of ($0.23) for the current fiscal quarter, according to Zacks. Zero analysts have issued estimates for ObsEva’s earnings. The highest EPS estimate is ($0.22) and the lowest is ($0.24). ObsEva reported earnings per share of ($0.49) during the same quarter last year, which would suggest a positive year over year growth rate of 53.1%. The company is expected to issue its next quarterly earnings report on Thursday, November 4th.

According to Zacks, analysts expect that ObsEva will report full year earnings of ($0.99) per share for the current fiscal year, with EPS estimates ranging from ($1.02) to ($0.96). For the next year, analysts expect that the firm will report earnings of ($0.68) per share, with EPS estimates ranging from ($0.87) to ($0.48). Zacks’ EPS averages are an average based on a survey of sell-side research analysts that follow ObsEva.

ObsEva (NASDAQ:OBSV) last announced its earnings results on Thursday, August 5th. The company reported ($0.25) earnings per share for the quarter, beating analysts’ consensus estimates of ($0.26) by $0.01.

A number of equities analysts have recently issued reports on OBSV shares. HC Wainwright reiterated a “buy” rating and set a $17.00 price objective on shares of ObsEva in a research note on Wednesday. Wedbush reaffirmed a “buy” rating and issued a $21.00 price objective on shares of ObsEva in a report on Friday. Finally, Zacks Investment Research upgraded shares of ObsEva from a “sell” rating to a “hold” rating in a research report on Tuesday, September 7th. One investment analyst has rated the stock with a sell rating, one has issued a hold rating and three have issued a buy rating to the stock. According to MarketBeat, the company currently has an average rating of “Hold” and an average price target of $11.31.

ObsEva SA is a clinical-stage biopharmaceutical company, which engages in the research and development of therapeutic treatments for woman’s reproductive health and pregnancy. It offers biopharmaceutical drugs addressing conditions compromising pregnancy from conception to birth. The company was founded by Ernest Loumaye and André Chollet on November 14, 2012 and is headquartered in Geneva, Switzerland.

Further Reading: What is the Gross Domestic Product (GDP)? 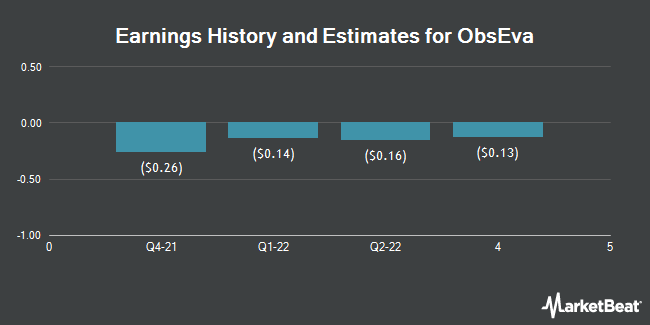 Receive News & Ratings for ObsEva Daily - Enter your email address below to receive a concise daily summary of the latest news and analysts' ratings for ObsEva and related companies with MarketBeat.com's FREE daily email newsletter.

Complete the form below to receive the latest headlines and analysts' recommendations for ObsEva with our free daily email newsletter: