Equities analysts predict that Skyline Champion Co. (NYSE:SKY) will report earnings of $0.62 per share for the current fiscal quarter, according to Zacks Investment Research. Two analysts have made estimates for Skyline Champion’s earnings. Skyline Champion reported earnings per share of $0.31 during the same quarter last year, which would suggest a positive year-over-year growth rate of 100%. The company is scheduled to issue its next earnings report on Tuesday, October 26th.

Skyline Champion (NYSE:SKY) last posted its quarterly earnings data on Tuesday, August 3rd. The company reported $0.75 earnings per share (EPS) for the quarter, topping the consensus estimate of $0.56 by $0.19. Skyline Champion had a return on equity of 21.06% and a net margin of 6.99%.

Featured Story: What is a dead cat bounce? 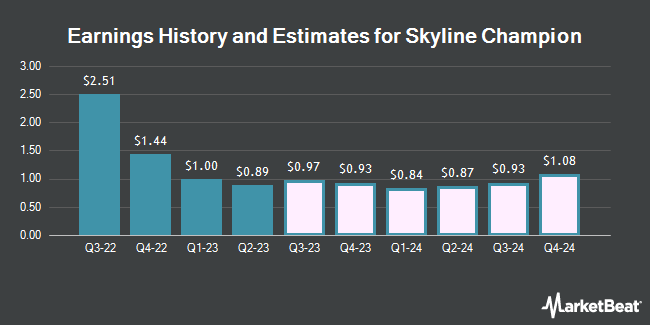 Complete the form below to receive the latest headlines and analysts' recommendations for Skyline Champion with our free daily email newsletter: