Etsy, Inc. (NASDAQ:ETSY) has received an average recommendation of “Buy” from the twenty-two ratings firms that are presently covering the firm, MarketBeat.com reports. Three analysts have rated the stock with a hold rating and sixteen have issued a buy rating on the company. The average 12-month price target among analysts that have issued ratings on the stock in the last year is $223.64.

Etsy (NASDAQ:ETSY) last released its earnings results on Wednesday, August 4th. The specialty retailer reported $0.68 earnings per share for the quarter, beating analysts’ consensus estimates of $0.64 by $0.04. Etsy had a return on equity of 73.54% and a net margin of 22.45%. The company had revenue of $528.90 million during the quarter, compared to analyst estimates of $525.70 million. During the same quarter in the previous year, the company posted $0.75 EPS. Etsy’s revenue for the quarter was up 23.5% on a year-over-year basis. As a group, equities research analysts expect that Etsy will post 2.94 EPS for the current year.

Etsy, Inc engages in the operation of online marketplace. It offers handmade products such as shoes, clothing, bags, and accessories. It operates through the following geographical segments: United States, United Kingdom, and Other International. The company was founded by Haim Schoppik, Robert Kalin, Jared Tarbell, and Christopher Maguires in 2005 and is headquartered in New York, NY. 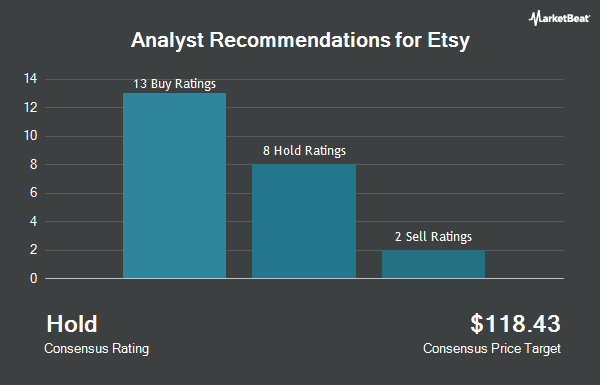 Receive News & Ratings for Etsy Daily - Enter your email address below to receive a concise daily summary of the latest news and analysts' ratings for Etsy and related companies with MarketBeat.com's FREE daily email newsletter.

Complete the form below to receive the latest headlines and analysts' recommendations for Etsy with our free daily email newsletter: