US Bancorp DE lowered its position in Bloom Energy Co. (NYSE:BE) by 93.1% during the 2nd quarter, Holdings Channel.com reports. The firm owned 2,310 shares of the company’s stock after selling 31,205 shares during the quarter. US Bancorp DE’s holdings in Bloom Energy were worth $62,000 as of its most recent filing with the Securities and Exchange Commission.

Bloom Energy (NYSE:BE) last issued its earnings results on Tuesday, August 3rd. The company reported ($0.23) earnings per share (EPS) for the quarter, missing analysts’ consensus estimates of ($0.06) by ($0.17). The company had revenue of $228.47 million for the quarter, compared to analyst estimates of $235.42 million. Bloom Energy had a negative net margin of 13.51% and a negative return on equity of 199.28%. The company’s quarterly revenue was up 21.6% on a year-over-year basis. During the same period last year, the business earned ($0.23) EPS. Equities research analysts expect that Bloom Energy Co. will post -0.68 earnings per share for the current fiscal year.

Bloom Energy Corp. engages in the manufacture and installation of on-site distributed power generators. Its product, Bloom Energy Server, converts standard low-pressure natural gas or biogas into electricity through an electrochemical process without combustion. The company was founded by K. R. Sridhar, John Finn, Jim McElroy, Matthias Gottmann and Dien Nguyen on January 18, 2001 and is headquartered in San Jose, CA.

See Also: How does a reverse stock split work?

Want to see what other hedge funds are holding BE? Visit HoldingsChannel.com to get the latest 13F filings and insider trades for Bloom Energy Co. (NYSE:BE). 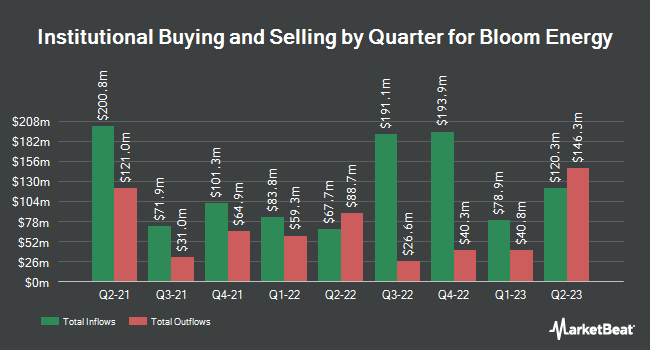 $0.24 Earnings Per Share Expected for Earthstone Energy, Inc. This Quarter

Complete the form below to receive the latest headlines and analysts' recommendations for Bloom Energy with our free daily email newsletter: