Millrace Asset Group Inc. raised its holdings in Cooper-Standard Holdings Inc. (NYSE:CPS) by 23.9% in the second quarter, according to the company in its most recent disclosure with the SEC. The firm owned 85,606 shares of the auto parts company’s stock after acquiring an additional 16,540 shares during the quarter. Millrace Asset Group Inc. owned 0.50% of Cooper-Standard worth $2,483,000 as of its most recent filing with the SEC.

Cooper-Standard (NYSE:CPS) last released its quarterly earnings results on Wednesday, August 4th. The auto parts company reported ($3.00) earnings per share (EPS) for the quarter, missing the consensus estimate of ($1.63) by ($1.37). Cooper-Standard had a negative return on equity of 9.88% and a negative net margin of 4.66%.

Separately, Sidoti assumed coverage on Cooper-Standard in a research note on Thursday, September 9th. They set a “buy” rating for the company.

In related news, Director Oss Stephen A. Van acquired 10,000 shares of the company’s stock in a transaction that occurred on Wednesday, August 11th. The stock was purchased at an average price of $24.06 per share, for a total transaction of $240,600.00. Following the transaction, the director now owns 25,182 shares in the company, valued at approximately $605,878.92. The purchase was disclosed in a filing with the Securities & Exchange Commission, which can be accessed through this link. Company insiders own 4.30% of the company’s stock.

See Also: Does a trade war provide a risk to the global economy? 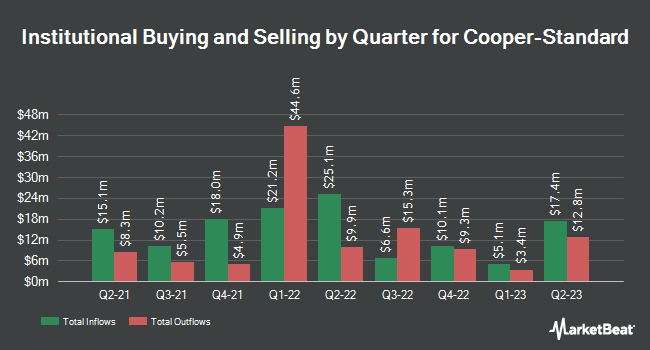 Complete the form below to receive the latest headlines and analysts' recommendations for Cooper-Standard with our free daily email newsletter: