Houlihan Lokey, Inc. (NYSE:HLI) Director Robert A. Schriesheim purchased 131 shares of the business’s stock in a transaction that occurred on Thursday, September 16th. The stock was bought at an average price of $90.64 per share, with a total value of $11,873.84. The transaction was disclosed in a document filed with the Securities & Exchange Commission, which is available at this link.

Houlihan Lokey (NYSE:HLI) last announced its quarterly earnings results on Tuesday, August 3rd. The financial services provider reported $1.19 earnings per share (EPS) for the quarter, topping the consensus estimate of $1.12 by $0.07. The company had revenue of $372.70 million during the quarter, compared to the consensus estimate of $380.84 million. Houlihan Lokey had a net margin of 20.90% and a return on equity of 26.92%. The company’s revenue for the quarter was up 76.6% compared to the same quarter last year. During the same period in the prior year, the business earned $0.56 earnings per share. Equities analysts expect that Houlihan Lokey, Inc. will post 4.47 earnings per share for the current year.

Recommended Story: What moving averages are used to define a golden cross? 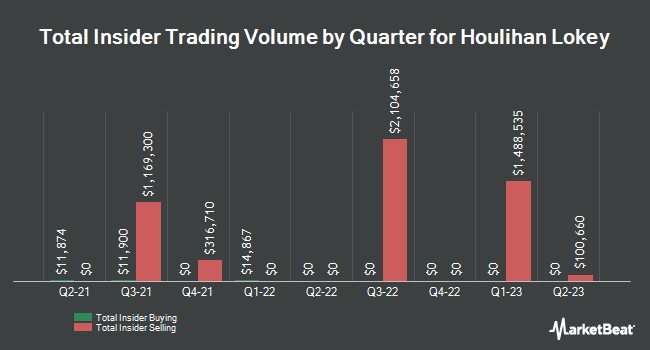 Complete the form below to receive the latest headlines and analysts' recommendations for Houlihan Lokey with our free daily email newsletter: